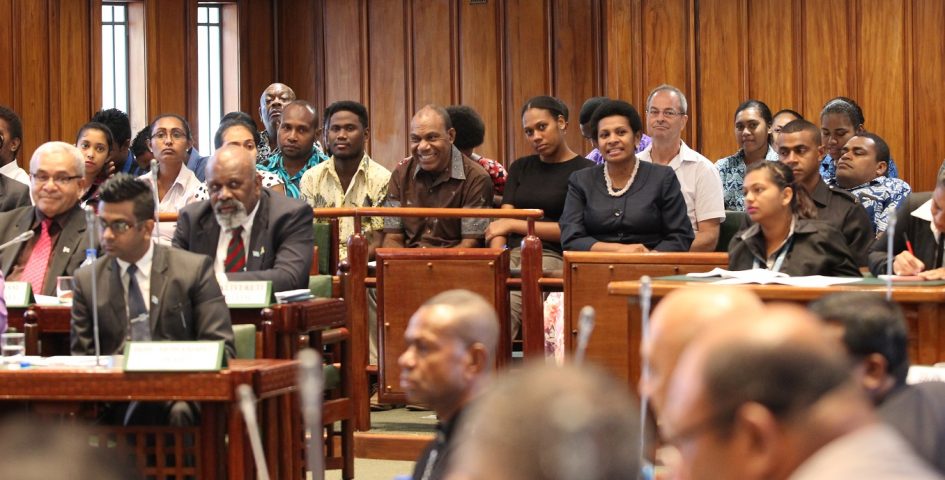 More than 400 PL100 Politics and Government students of the University of the South Pacific have visited Parliament for the past three years.

According to the Unit Lecturer Professor Robert Nicole, having the drama unfold in front of the students is invaluable.

“Outside of Parliament, the students form their own images of what it’s like inside Parliament but it’s nothing like seeing them in real life.”

“They witness robust debates and better understand how Parliament works, how Government and Opposition works, what is a bill, how a bill becomes an act, etc,” Prof Nicole said.

As this is the student’s first year in studying politics, bringing them to Parliament greatly assists in their better understanding of how Parliament works, especially during sitting weeks.

“The students can be taught over and over in the classroom but it clicks when they see for themselves inside Parliament. It’s the moment when they put all different pieces together,” Professor said.

Ms Loise Almai of Solomon Islands found the session very interesting and was different from the Solomon Parliament.

“How the Opposition team reacted to what was raised by the Government Ministers was aggressive and I found it alive and interesting,” Ms Almai said.

Tokelau student Ms Elaina said the Fijian Parliament is different from the Parliament of Tokelau.

“In Tokelau it’s more traditional in terms of setting and the Fijian Parliament is modern.”

“The Parliament session was very interesting and there was a lot of tension. The debate was interesting to watch,” Ms Elaina said.

The students took turn in coming to Parliament with a batch of 30 students per day throughout this week.

The students also go through a 20-30 minutes presentation about Parliament by Parliamentary staff and visited the Parliament Discovery Center before they witness the debates inside Parliament.

This exercise will continue in future with new students taking the same course will visit Parliament during sitting weeks.