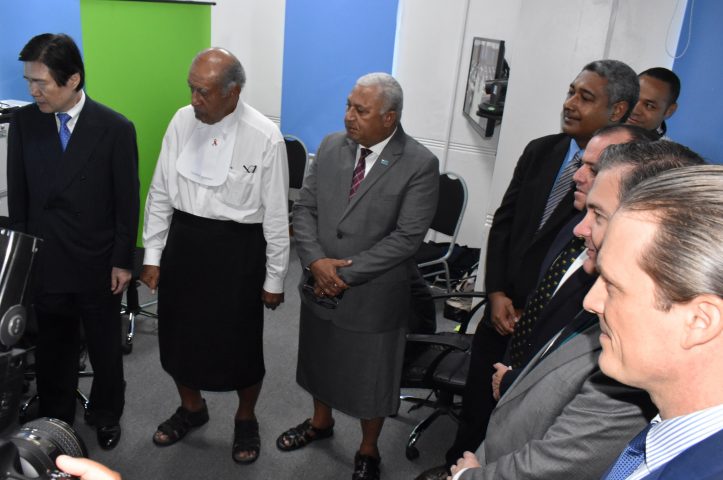 Speaker of the Fijian Parliament, His Excellency Hon. Ratu Epeli Nailatikau is confident that the ICT investment by the UNDP Fiji Parliament Support Project will have a long-lasting positive impact on Parliament and its work now and in the years ahead.

While officiating at the handing-over of the equipment this morning, the Speaker thanked UNDP and the donor partners from the Governments of Australia, Japan and New Zealand for their continued support towards the development of the Fiji Parliamentary services.

“In November last year, Parliament launched the committee broadcast system which allowed the live broadcast of our parliamentary committee sittings through television and online streaming media. These systems have been part of Parliament’s effort to progress the e-Parliament initiative.

“However, the social-distancing norms and safety protocols brought about by COVID-19 has compelled Parliament to speed up this initiative and ensure that the core parliamentary processes of representation, oversight and scrutiny are not disrupted.

“We have to ensure there is minimal disruption to our committee processes and Parliament’s accessibility to citizens. In the midst of COVID-19 our core work must continue, albeit in a different form.”

The Speaker highlighted that members of the Standing Committees and secretariat staff have been effectively testing and using the system in the last couple of months.

“This new system is a hybrid solution that will add on to the existing system and allow two-way virtual voice and video communication between Standing Committees and stakeholders and members of the public during committee hearings.

“The system also allows Standing Committee members or Members of Parliament to have virtual meetings or participate in webinars or online conferences with their counterparts abroad,” Hon. Ratu Epeli said.

The UNDP Pacific Office in Fiji Deputy Resident Representative a.i., Kevin Petrini, highlighted that Parliaments, like other public institutions in the Pacific region and across the world, have been progressively making use of modern technology to better carry out their constitutional functions.

“Information technologies are in fact, nowadays, an essential tool that parliaments are using to become more open, accessible, accountable and effective.

“The Fijian Parliament itself has already made significant progress in new technologies since 2014 – to the point that it is already one of the, if not the most advanced Parliament in the Pacific Island countries regarding the use of ICTs in its work,” Mr Petrini added.

The handing-over ceremony today was attended by the Prime Minister and Minister for iTaukei Affairs, Sugar Industry and Foreign Affairs, Hon. Voreqe Bainimarama and Cabinet Ministers, the Leader of Opposition, Hon. Sitiveni Rabuka, Members of Parliament, senior officials from UNDP and other invited guests.