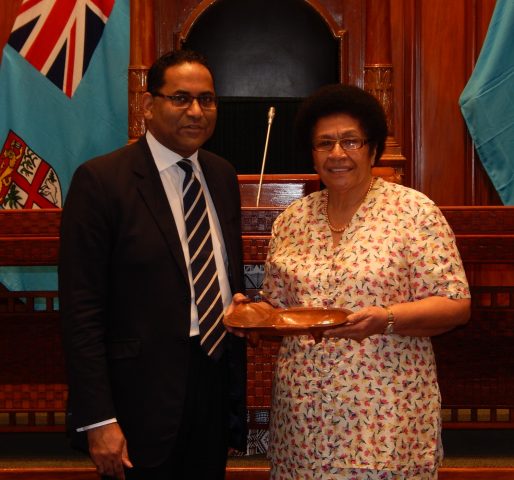 “Democracy flourishes at its best where there is trusting relationships between Parliament, parliamentarians and citizens.”

Those were the words of the Secretary-General of the Commonwealth Parliamentary Association (CPA), Mr Akbar Khan while visiting the Fijian Parliament today, Sunday 30th April 2017.

He met with the Speaker Hon. Dr Jiko Luveni and was given a presentation on the initiatives by the Fijian Parliament in engaging with the citizens of Fiji and also the progress of the projects that were funded by the CPA.

Mr Khan was delighted to hear some of the initiatives like the outreach programmes i.e. the Meet the Speaker and Parliament Bus programmes, the gender working group in Parliament and engagement with youth and women empowerment programmes.

“I’m really delighted to have come here and hear some excellent initiatives which are being run by the Fijian parliament and I encourage this to continue.”

“I’m confident under the leadership of the Honourable Speaker and with her parliamentarians, are making enormous contributions towards democracy here in Fiji,” Mr Khan added.

The Secretary-General confirmed that he has had a very constructive discussion with the Speaker about how the CPA can continue to strengthen its support towards the Fijian Parliament.

Hon. Dr Luveni was thankful for the opportunity to meet with the Secretary-General and presented to him the initiatives of the Fijian Parliament.

Mr Khan returned yesterday from an engagement in Darwin, Australia and leaves tomorrow for New Zealand.