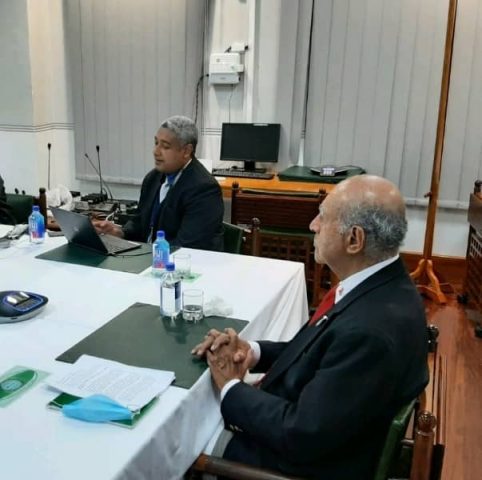 The Fijian Parliament has been meeting despite the COVID-19 pandemic and this was largely due to initiatives that commenced in 2020.

“The Fijian Parliament’s ability to continue Parliamentary business amidst the pandemic is attributed to the timely investments in its e-Parliament initiative which began in 2020 and included the development and strengthening of the I.T facilities to ensure effective online or virtual communications,” said the Speaker HE Hon. Ratu Epeli Nailatukau.

The Speaker of Parliament shared these sentiments yesterday during the World e-Parliament Conference that was held virtually.

The World e-Parliament Conference is the leading international forum for exchanging good practices and building inter-Parliamentary cooperation in the area of innovation and digital technology in Parliaments.

“The target was enhancing Parliament’s accessibility to citizens for information resources, and access to committee inquiries. But it became crucial in ensuring the continuity of business during the lockdowns that were instituted to counter the transmission of the pandemic,” said the Speaker of Parliament.

“This initiative was due to the successful partnership between the Fijian Parliament, the Government and our development partners of Australia, Japan and New Zealand that was facilitated under the United Nations Development Programme – Fiji Parliament Support Project.”

“However, we have been able to have hybrid sittings from 25 May to 7 June. This was a milestone in the history of the Fijian Parliament and Parliamentary democracy in Fiji.”

“More than 50 percent of the Members attended the sitting virtually, with the remainder attending in-person and observing Parliament’s COVID-19 safe protocols. In total we have had 94% daily attendance.”

“During these hybrid sittings, Committee Reports and Bills were tabled, debated and passed by acclamation and were televised live on free-to-air TV and live-streamed on the Parliament’s website and Facebook page,” the Speaker of Parliament added.

The Speaker continued that despite these successes there were challenges to be fine tuned to allow continuity.

“While we have a working I.T infrastructure to support virtual meetings and work-from-home policies and initiatives, there are challenges such as internet connectivity, MPs’ tech knowledge and skills, and so forth which we are continually fine tuning.”

“Fortunately, for Members of Parliament, the secretariat had conducted its training well before the pandemic surfaced and have showed great resourcefulness in providing the ongoing essential back-up services,” concluded the Speaker.

The Manager I.T. at the Fijian Parliament Mr Maika Lakeba also participated as a panellist during the Conference and said that the Parliamentary Committees and members of the public have benefitted a lot from these new initiatives.

“There has been enhanced accessibility especially through Facebook and this has given the public immediate live access to the sittings and Committee inquiries. Due to the instantaneous nature of social media, the public is able to quickly raise issues and engage in open debate about the issues covered in plenary. For Committee inquiries, the public is able to easily access the open sessions. These also increase the visibility of the Committees to the public, as more often than not they assume that the monthly sittings or plenaries are all that happens in Parliament.

This year’s Conference takes place against the backdrop of the COVID-19 pandemic. Since early 2020, Parliaments have made extensive use of digital technologies to support remote working. It has been a period of accelerated innovation and the rapid adoption of new working practices and procedures.

The virtual Conference was organised by the Inter-Parliamentary Union and took place from Wednesday, 16 June 2021 to Friday, 18 June 2021.