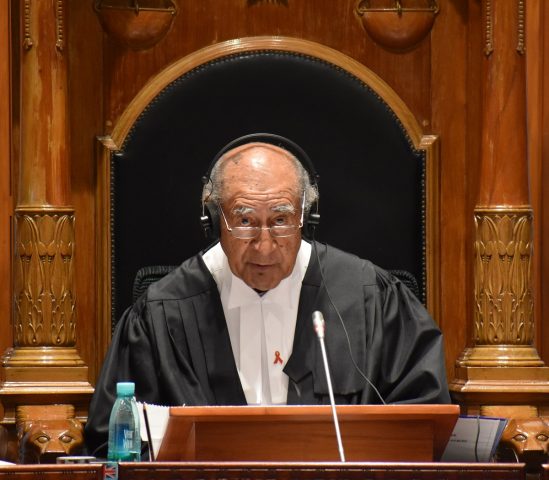 Honourable Members, I had received a third petition from the Hon. Viliame Gavoka and after having scrutinised the petition, I will provide my ruling on whether it will be presented to Parliament.

The petition from the Hon. Viliame Gavoka on behalf of the people of the Tikina Nasigatoka against the plan to mine Magnetite at the mouth of the Sigatoka river. This petition requests that Parliament “refer to the Standing Committee on Natural Resources to conduct a holistic inquiry into the planned mining of the Sigatoka River mouth with the view to protect the interests and well-being of the people of the Tikina Nasigatoka and surrounding communities”.

That said, it is my ruling that regardless of the issue of contention, this petition cannot be tabled in Parliament as in each instance it seeks action which is not within the powers of Parliament to take.

Firstly, if the issue in contention is the authority upon which such mining activities have been sanctioned, I must reiterate my earlier rulings in relation to petitions in Parliament where I have emphasised the need to ensure that Parliament upholds and respects the constitutional separation of powers between the three Arms of the State, that being the Judiciary, the Legislature and the Executive. It is not for Parliament to direct or instruct the exercise of the Executive Authority when a written law expressly gives the power and authority to the Executive, whether a Minister or a Public Officer, to make decisions under any such law.

Again, I remind Honourable Members that the use of petitions in Parliament for such a purpose is fundamentally and legally flawed and ignores the fact that, by written law, Parliament has given the authority to the relevant officer to make the decision. The constitutional separation of powers between the respective Arms of the State must always be upheld and never jeopardised.

That said, if the petition is predicated upon the contention that Parliament must review the mining activities of whatever company may currently be operating in the area, I must again conclude that the petition seeks action which is not within the powers of Parliament to take.

The activities of a non-State or private entity do not fall within the ambit of Parliament’s responsibility. Parliament is responsible for the enactment of laws and scrutinising Government administration.

It is not within Parliament’s mandate to scrutinise the activities of a non-State entity. If this were so, and bearing in mind the fact that some Honourable Members seem to be operating under the presumption that a petition may be admissible despite only having a single signature, individuals may subject Parliament to a barrage of petitions inquiring into the business activities of any company in the private sector.

As such, on this ground as well, I therefore rule that the petition cannot be tabled before Parliament as it does not meet the requirements under Standing Order 37.

Ruling in Relation to Online Signatures

Honourable Members, for your information, I also received a letter from the Hon. Lynda Tabuya seeking a ruling on Standing Order 37 in relation to the definition of “signatures” and whether they may include electronic signatures.

I agree that in this new age of technology it is imperative that we, as they say, ‘move with the times’. Technological advancements have allowed for easier access to a great deal of services and more efficient ways of doing things. Our beloved nation has worked hard to stay abreast of these developments, even promulgating legislation such as the Electronic Transactions Act 2008 which addresses the recognition of electronic signatures. This, I believe will provide some direction for us in assessing this matter.

Honourable Members, section 14 of the Electronic Transactions Act 2008 states that, in relation to written laws, a requirement that a signature be provided may be met by an electronic signature if there is a method provided for identifying the person signing and the person receiving the signature consents to this method.

I believe this is a test that is appropriate to apply in this instance. As such, I must consider the method used to present with me an electronic signature, the capacity of this method to accurately identify the person making the signature and then decide whether we shall consent to such method.

In making this assessment, I have also considered the practices of similar jurisdictions in this regard. I note that the United Kingdom House of Commons and the Australian House of Representatives allow for electronic petitions and by extension electronic signatures; however, the platform for these petitions is the official websites of their respective legislatures. This is done in order to assist in the identification of the individuals signing the petition.

Honourable Members, Parliament is the embodiment of the wishes of the Fijian people – serving as their ultimate form of representation. That said, online petitions which are not hosted on an official platform that provides for the verification of a person’s identity may be susceptible to exploitation by any person with no connection to Fiji such as foreign citizens.

Ruling on Standards for Petitions

­­­­­­­­­­­­­­Honourable Members, having delivered my rulings on the petition and matter before me, I now wish to provide a ruling in relation to the standard of petitions submitted for tabling before Parliament which shall, I hope, ensure that we are all clear as to how this process is intended to operate.

I have on numerous occasions emphasised several of the requirements for petitions that I have repeated today and yet I continue to receive petitions which do not meet these requirements. In 2019 alone I delivered 6 rulings emphasising these requirements and yet today I have had to address another such petition. Honourable Members, I had hoped that Members would conduct their own legal research, perhaps reading Erskine May’s Treatise on the Law, Privileges, Proceedings and Usage of Parliament, before submitting further petitions but it does not seem that this has eventuated.

As I have already stated, pursuant to Standing Order 37 clause (2)(b), the Speaker must scrutinise a petition to “ensure that the petition … is seeking action which lies within the powers of Parliament to take”.

This is a requirement that is not uncommon in jurisdictions operating under a Westminster system. It is well established that petitions in the UK Parliament must and I quote “contain a clear request, or ‘prayer’, to the House for a remedy which is within its competence to grant”. Furthermore, I take note of the fact that the UK House of Commons through the UK Petitions Committee has developed their own standards for the admissibility of petitions in order to give effect to this requirement.

As such, I believe that it is time that we develop standards of our own, taking into account similar standards used in jurisdictions such as the United Kingdom.

I believe that this will provide clear and distinct rules for the admissibility of petitions.

Please note that these standards do not exceed the source of their authority as they are in one way or another simply a clarification of the requirements under Standing Order 37 or of the obligations set out in the Constitution or written law.

Honourable Members, I hereby rule that in order for petitions to be tabled before Parliament they must comply with the following standards ­–

Honourable Members, I urge you to consider these standards before submitting any petitions to Parliament in the future. I would also advise you all to consider whether the outcomes you seek are best suited for petitions or if there are other parliamentary processes which may better serve you.

That concludes my ruling on this matter.