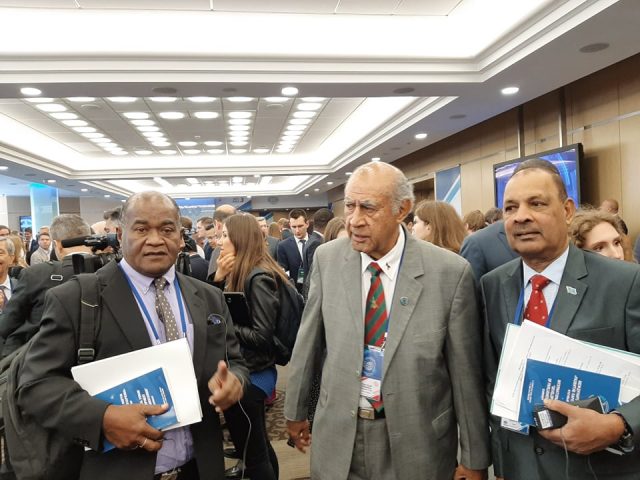 The participation of the Speaker in the second International “Development of Parliamentarism” Forum at the invitation of his Russian counterpart, illustrates the common willingness to promote parliamentary relations and consolidate institutional communication, one of the institution’s priorities in the service of national issues.

The second International Forum was held at the World Trade Center in Moscow from Monday 1st July to Wednesday 3rd July 2019 upon the invitation of the State Duma of the Federal Assembly of the Russian Federation.

Representatives of 132 states, including 41 speakers of parliament, and 14 international parliamentary organizations took part in the Forum.

In his speech within the framework of the section on “Role of Youth in the Development of Parliamentarism”, Hon. Speaker spoke about the Fijian Parliament’s civic and educational programmes being delivered to schools and communities.

“The Fijian Parliament has been delivering educational programs and resources to schools and communities to encourage engagement in Parliament and to connect them with their elected representatives to talk about their issues and the importance of parliamentary democracy.

“The Fijian Parliament is taking forward this invaluable work because democracy demands active and involved citizens of all ages taking action to make our society a better place.

“Our Parliament outreach range from legislative interns programme enabling graduate students an opportunity to immerse themselves in politics and parliamentary life for 2 years, to the sponsoring of youth parliaments, women parliaments, school debates, oratory contests, poster competition on international youth days, meet the speaker programmes for schools, parliament bus tours of schools and communities, speaker’s debates and educational programs and resources for students, teachers and the public at large,” the Speaker said.

He also emphasized the importance of technology which he believes can assist in the Members  of Parliament (MPs) ambition to become even closer to those they serve.

“The internet in all its manifestations can be the means by which we boost electoral participation, particularly with our ICT-savy millenium generation.

“The Fijian Parliament, for example, has an extensive website and deploys an array of social media to spread the message about the activities with which we are engaged, including equipping MPs with the latest ICT gadgets to communicate closely with the electorate,” Hon. Ratu Epeli said.

The Speaker also highlighted the role he plays as Fiji’s Ambassador for HIV/AIDS as well as the UNAIDS Goodwill Ambassador for the Pacific region. He reminded participants of the target to be fulfilled by the Year 2030, and that is to end AIDS as a public health threat by 2030.