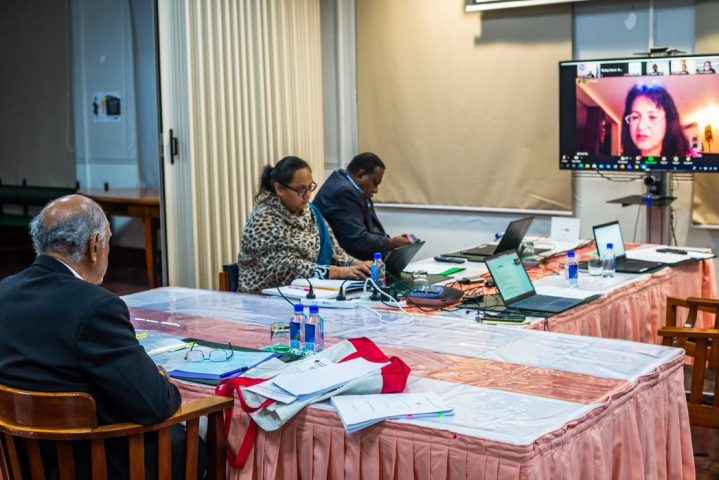 The virtual Inter-Parliamentary Union (IPU) briefing and Q&A Session was held early this morning from 12am – 2am (17 February 2021) and attended by the Speaker, Hon. Ratu Epeli Nailatikau and the Secretariat team headed by the Acting Secretary-General to Parliament, Mrs Jeanette Emberson.

The virtual meeting was an important meeting being the Q&A session for the upcoming IPU events, in particular, the 142nd Assembly and Governing Council meetings of the IPU to be held in May.

IPU Secretary-General Mr Martin Chungong welcomed the 100-plus participants and made special mention of the Hon. Speaker Ratu Epeli for attending the meeting and taking a leadership role amongst Pacific parliaments to engage with the IPU.

The facilitators also acknowledged the Fiji delegation’s attendance at such odd hours of the night.

IPU Director Member Parliaments and External Relations, Ms Anda Filip gave an update on the preparatory work for the Assembly and other major events such as the World Conference of Speakers and the 143 Assembly scheduled for Kigali, Rwanda later in the year.

The meeting also discussed the streamlining of some processes and procedures due to these events being conducted online.

Ms Filip also discussed the planned review of the IPU Strategic Plan as the current one ends this year. The meeting also noted how IPU and its members have been working to address the disruptions brought about by the pandemic and the resulting work environment.

Participants also had the opportunity to ask questions and seek clarification on the processes, procedures and format of the upcoming Assembly, conferences, side events and lead-up meetings.