Ruling on the email and statement by the National Federation Party 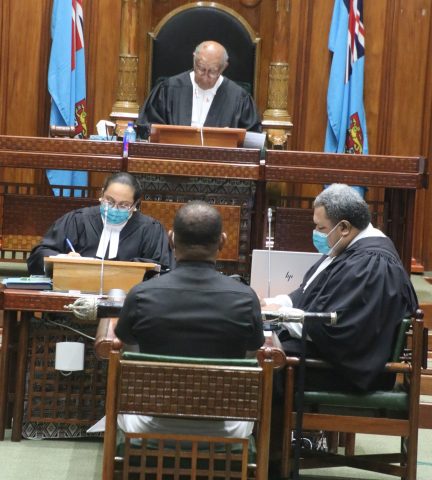 Honourable Members, I will now address issues raised by the National Federation Party in regards to –

The Hon. Pio Tikoduadua stated that he had only read the email communication from the Secretariat on the morning of Monday, 28 February 2022, as he was in Ra “all weekend”. He then made the following recommendations in his communication –

Also in his communication, the Hon. Tikoduadua felt that the Flying Minute was “most unusual and illegal”. He does not provide any clarity on how this was illegal. Hon. Tikoduadua then argued that –

(a)     “there is absolutely no need or urgency to send a flying minute for the sole purpose of tabling and debating a budget when a proper Business Committee has been properly scheduled for 3rd March 2022. And

“the Speaker of Parliament and the Secretary-General to Parliament should defend Parliament’s interests and independence first and should not have entertained the proposal to set aside the March Parliament Sitting by the Government.”

He further stated that the Office of the Speaker –

“should have done to the Government proposal as it does to issues raised by the Opposition and that was for Tables to disallow it”.

Honourable Members should take note of the following –

At this juncture, I wish to inform all Honourable Members that a flying minute pertaining to the Revised Budget sittings and deferral of the March sitting to April, was communicated to the Business Committee which comprises four Members from the Government, two Members from SODELPA and two Members from the NFP. The Business Committee had three clear days to peruse its content and provide comments accordingly. No objections were received and following that, the final Order Papers were circulated to all Honourable Members.

There has been no subversion of Parliamentary democracy nor an ambush of Parliamentary processes. All Honourable Members will be given an opportunity to contribute to the debates. I remind Honourable Members that the job of the Opposition to hold the Government to account is not only limited to the budget processes. The Opposition has ample opportunity and space to voice its concerns and undertake oversight work through the various Parliamentary Committees. The Standing Committees allows all Members from both sides to ask critical questions and scrutinise public expenditures and the raising of revenue in the various implementing agencies of the Government. Additionally, the Opposition has further opportunity to undertake its oversight role through business brought to the floor of the House – such as debates on motions, petitions, Bills and question time and end of week statements.