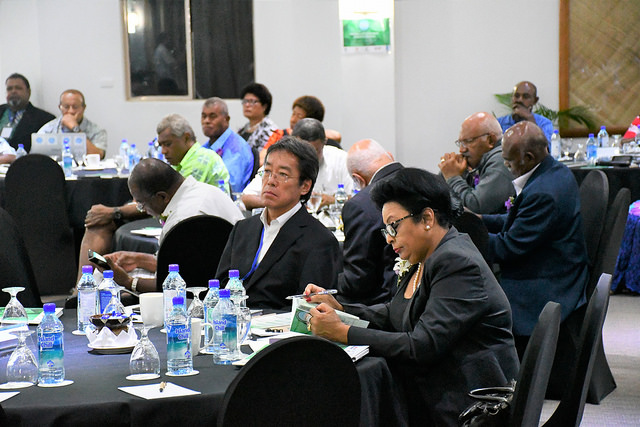 Sigatoka, Fiji (04 December 2018) – To assist Members of Parliament (MPs) of the Republic of Fiji gain a deeper understanding of their main functions of scrutiny, oversight and representation, a three-day retreat for MPs in the new term is currently underway in the Coral Coast.

A special emphasis of the meet addresses how Parliament Committees can connect and engage with local communities through Committee work.

The retreat is organised by the Parliament of the Republic of Fiji with support of the British High Commission Suva and the Fiji Parliament Support Project, which is a project implemented by the United Nations Development Programme (UNDP) Pacific Office in Fiji with funding from the Governments of Japan, New Zealand and Australia.

In her opening address, the Deputy Speaker for the Parliament of the Republic of Fiji, Honourable Veena Bhatnagar stressed the importance of engaging with communities.

“There is a need to establish a connection with our communities as this is an avenue through which we as Members of Parliament can promote a greater understanding of Parliament’s role and responsibilities,” said Hon. Bhatnagar.

She added, “There is also a great responsibility in ensuring that the Executive is properly scrutinised, that debates on national issues are promoted and that community views are taken into account so that sound and meaningful policies can be formulated and implemented benefitting all.”

On the issue of gender equality, Hon. Bhatnagar highlighted the unique opportunity Parliament has in driving this agenda.

“Parliament is uniquely placed to make a difference in gender equality through both its legislative powers and its powers of scrutiny of the actions of Government,” said Hon. Bhatnagar.

She added, “In 2017, UNDP partnered with the Fijian Parliament on publishing a practical toolkit on ‘Scrutinising Legislation from a Gender Perspective’, an initiative to assist MPs in mainstreaming gender equality in their legislative and oversight functions. So, Parliament has indeed the framework and the tools in place to ensure positive gender equality outcomes for the Fijian people.”

“As elected parliamentarians, you will play a crucial role in shaping Fiji’s national development policies and laws that advance human development and ultimately accelerate progress towards the achievement of the Sustainable Development Goals (SDGs),” said Burkhanov.

He added, “The Fiji Parliament has made great strides in localizing the SDG action. In the previous term, it made history by becoming the first Parliament in the world to have carried out a self- assessment on the SDGs.”

On the issue of gender equality, Burkhanov highlighted how in many countries, politics remain a male dominated domain.

“We are very pleased to note the increase in number of women in the Fiji Parliament, the highest number ever in Fiji’s history. This is truly a powerful demonstration of the growing confidence that the Fijians have in women as national leaders and decision-makers,” said Burkhanov.

The retreat programme covers a range of topics which include Parliament as an institution, its main functions and role of MPs, the budget process and how Parliament can effectively engage with civil society and the media.

MPs will also hear from the Judiciary, Auditor-General and the Ministry of Economy on their respective areas of work.

The retreat is also attended by distinguished resource persons and observers from the Parliaments of Tonga, Samoa, New Zealand and Victoria in Australia, whose knowledge and expertise will provide important insights for the Honourable Members.