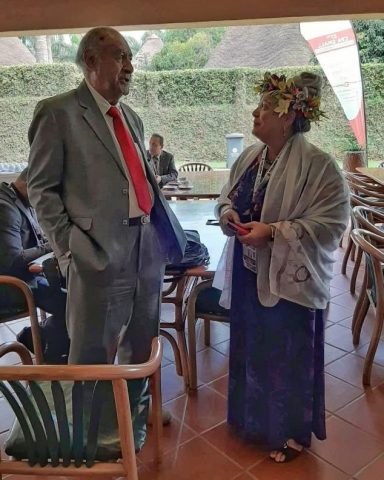 Hon. Niki Rattle spoke about the pressing need of small Legislations within the Commonwealth to come together, within their smallness to address common difficulties and strengths and share experiences of their Parliaments or Legislative Assemblies. As small states in the Commonwealth, among other small countries, the CPA Small Branches have learnt to appreciate their strengths while being flexible enough to be able to work with other larger Parliaments and to be influential.

The Fijian Parliament Speaker His Excellency Sir Ratu Epeli Nailatikau said that Hon Rattle carries with her a wealth of experience and the Fijian Parliament looks forward to working with her. The Fijian delegation was also present during this meeting for moral support to Hon. Rattle although Fiji is not a member of the CPA Small Branches.

“The appointment of Hon Nikki Rattle as Chairperson of CPA Small Branches augurs well with small island states CPA Small Branches Parliament. Her wealth of experience in Parliamentary matters and her active participation in the past in the CPA and Parliamentary forums around the world is an added advantage to the role she will play” commented His Excellency Sir Ratu Epeli Nailatikau.

“I congratulate Hon Rattle on her appointment and I will ensure that the Fijian Parliament works closely with her in the next three years in advocating for issues facing the CPA small branches and in particular climate change amongst other issues” added His Excellency Sir Ratu Epeli Nailatikau.

The election of the new Chairperson of Small Branches took place at the 37th CPA Small Branches Conference held in Kampala, Uganda as part of the 64th Commonwealth Parliamentary Conference.

Of the over 180 Branches of the CPA, forty-three Branches are classified as ‘Small Branches’ which are defined as jurisdictions having a population below 500,000 people. The CPA Headquarters Secretariat works closely with Small Branches in all Regions of the CPA to identify their unique needs and requirements in parliamentary strengthening, development and cooperation.