Parliamentary Meeting on the occasion of the Adoption of the Global Compact for Safe, Orderly and Regular Migration, 6-7 December 2018, Rabat (Morocco) 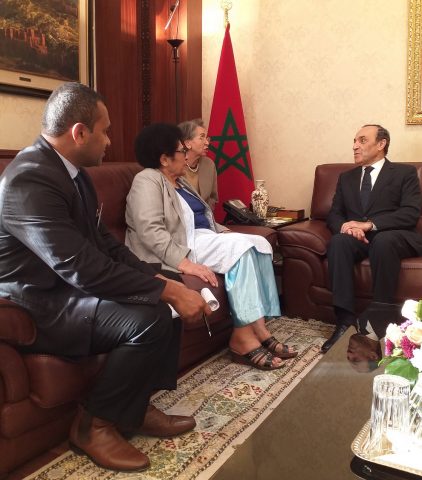 Speaker Hon. Dr Jiko Luveni recently returned from the Parliamentary Meeting on the Occasion of the Adoption of the Global Compact for Safe, Orderly and Regular Migration that was held from the 6-7 December, 2018 at the Parliament venue in Rabat, under the auspices of the Inter-Parliamentary Union, the House of Representatives and the House of Councilors of the Kingdom of Morocco.

During the meeting, parliamentarians had the opportunity to acquire knowledge not only on the various aspects of the Global Compact for Safe, Orderly and Regular Migrations, but also  formulated concrete actions and tools for the implementation of the commitments resulting from this Compact.

A highlight of the conference was the plenary session on regional challenges and implementation chaired by the Hon. Speaker.

“Having travelled thousands of miles to Morocco, it was important to highlight the plight of Small Island Developing States (SIDS) given the linkages between climate change and migration.

“SIDS are currently threatened by submergence, coastal flooding and coastal erosion and these threats intensify year after year due to the increasingly significant impacts of climate change,” Hon. Dr Luveni said in her concluding remarks.

The draft outcome document of the meeting included the call for national governments to consider migration as a development and human rights issue and to develop at the national level proper migration policies that are in sync with social, economic and environmental realities.

Hon. Dr Luveni was also invited to a bilateral meeting with the Speaker of the House of Representatives of the Kingdom of Morocco Parliament, Honorable Habib El Maliki.

The two Speakers shared the view that enhancing parliamentary cooperation and exchange would contribute to deeper understanding and friendship between the two countries and their people.

Both Speakers have agreed to the drafting of a Memorandum of Understanding (MoU) to further develop and strengthen friendship and cooperation between the two Parliaments.