Parliament visit a memorable one for students of Nasekula District School 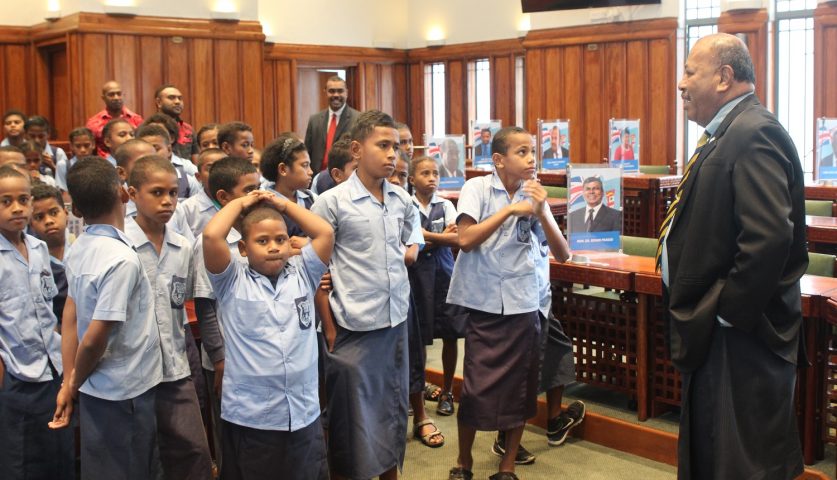 The exhaustion of travelling for almost a day from the Northern Division to the capital city on Tuesday was no barrier for 55 students of Nasekula District School (NDS) in Labasa as they visited Parliament for the first time yesterday, Wednesday 12th October 2016.

Instead, the trip was one that will certainly go down in their “history books” as the students met two former scholars who are now Members of Parliament (MPs), Honourable Anare Vadei and Honourable Mosese Bulitavu.

The students, who were accompanied by four teachers and a parent, could not hold back their excitement when they learned that the two MPs attended NDS during their primary school days.

Speaking to the students in the iTaukei dialect, Hon. Vadei said the school would always be a part of him and he was proud to have spent at least two years there.

He told the students that if a former scholar like him and Hon. Bulitavu could become Parliamentarians, it was also possible for other students from the school.

Hon. Vadei encouraged the students to do well in their studies and become future leaders who would help move the country forward.

School teacher Mr Semi Saravaki said the trip was made possible through the support and undying financial contributions from the former scholars, school management, parents, villagers and well-wishers in Fiji and abroad.
“We are so delighted and thankful to be here,” he said.

“We travelled across the Bligh waters for the purpose of learning about our Parliament and it has been a worthy trip for us. Our sincere gratitude goes out to the Honourable Speaker and her staff for giving us this opportunity.”

“Last but not the least, we would like to thank our supporters, school management and former scholars for making this trip happen.”