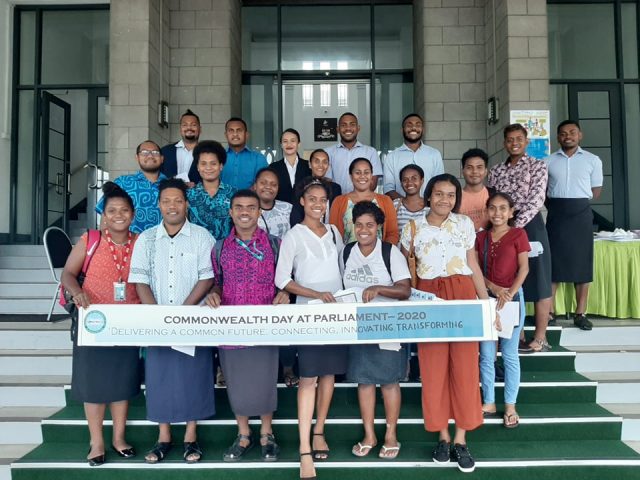 The Fijian Parliament opened its doors yesterday to tertiary students within the greater Suva area to mark Commonwealth Day, which is usually observed on the second Monday of March every year.

For Solomon Island final year USP student, Sally Kura, the visit has broadened her knowledge about the Commonwealth and also the Fijian Parliament.

“Back at home, I have never visited our Parliament and it’s a privilege to visit this august House in Fiji.

“While visiting the Chamber, I noticed that Members of Parliament sit close to each other across the room, as compared to what I see on television.”

University of the South Pacific student Sanjeshni Prasad was full of praise of her visit to Parliament and said that all the departments within Parliament was explained very well.

“We participated in lots of quizzes which helped us to better understand Parliament and the Commonwealth. I learnt how countries are grouped together within the Commonwealth and how they assist each other financially, especially during natural disasters.”

For University of Fiji law student, Viliame Koroinivalu, the visit has helped him to learn more about the history of the Fijian Parliament and getting to meet some Members of Parliament.

“For me, a highlight of my visit was meeting with some Members of Parliament. I also read about gender equality on the Commonwealth pamphlet, which caught my attention as we just celebrated International Women’s Day on Sunday.”

Member of the Standing Committee on Justice, Law and Human Rights, Hon. Rohit Sharma, gave a brief explanation about their role and urged students to study hard and aspire to become good citizens of our country.