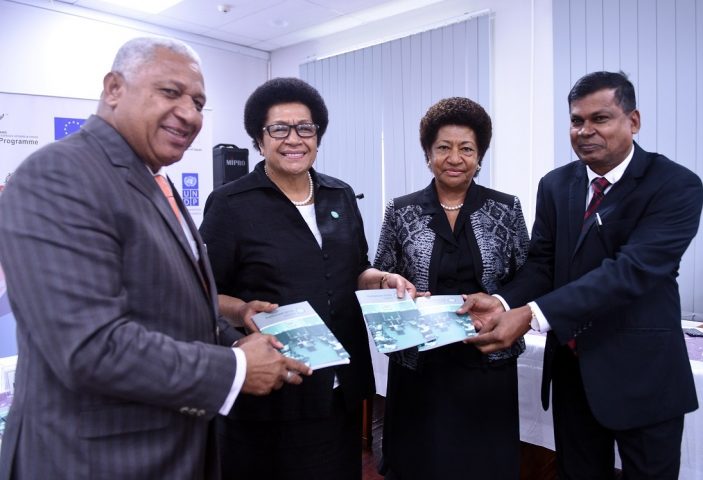 Members of Parliament and the general public will now have a better understanding about the roles and functions of the prestigious institution following the launch of the Parliament of Fiji handbook this afternoon.

The handbook, which provides a basic guide to the workings of the Fijian Parliament, was successfully compiled through the UNDP Fiji Parliament Support Project and its project donors-the European Union and the Governments of New Zealand, Japan and Australia.

While launching the handbook, Speaker Hon. Dr Jiko Luveni said the publishing of such document was one of the many ways to further boost people’s understanding on how Parliament works.

“I am quite passionate about opening Parliament by creating the enabling environment and opportunities for citizens to understand this institution, how it works and how they engage in the work of Parliament,” Hon. Dr Luveni said.

“This handbook is not designed to be exhaustive, technical compendium of parliamentary procedures as we already have this in the Parliament of Fiji Standing Orders.”

“Therefore, this Handbook does not in any way replace the Fiji Standing Orders which remains the definitive rule for the way Parliament operates. It is a living document that will need to be updated and revised over the years as we constantly consider ways of improving the way our Parliament works.”

“I would also like to thank UNDP Fiji Parliament Support project and their project donors, the European Union and the Governments of New Zealand, Japan and Australia, for their ongoing support to the Fiji Parliament.”

Country Director for UNDP Pacific Office in Fiji and Head of Pacific Regional Programme Policy Mr. Bakhodir Bukhanov congratulated the Fijian Parliament for making its work more open and accountable through the launch of the handbook.

“To the Honourable Members, I hope you find this handbook useful in your important role as legislators, representatives and overseers in understanding the various stages of passing the law, conducting oversight and effectively engaging people as the source of policies,” he said.

“At UNDP, through our Fiji Parliament Support project, we remain committed to supporting institutions of Parliament.”