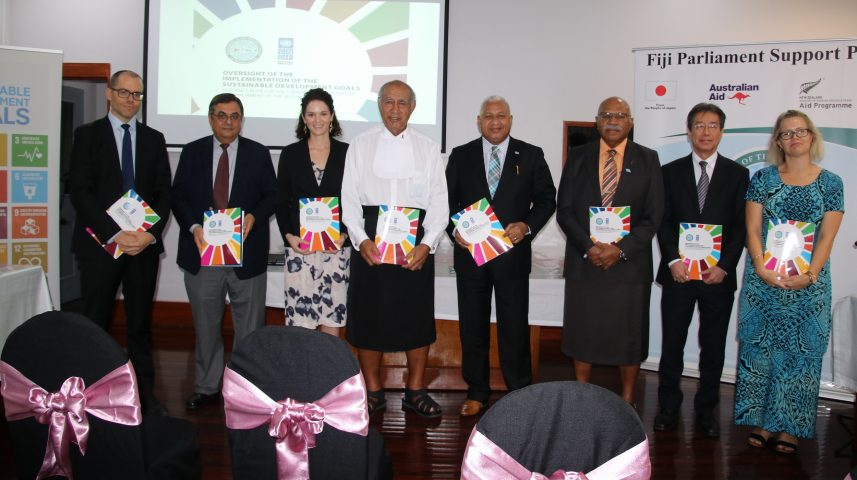 Building on previous efforts of strengthening the oversight, scrutiny of laws and representation role of the legislature, the Parliament of the Republic of Fiji with its partners, yesterday, launched a guidance note that will see the integration of the Sustainable Development Goals (SDGs) across the work of all Fiji Parliament Committees.

Every progress towards achieving the aspirations of the SDGs contributes directly to improving the lives of citizens. The day to day concerns of Fijians, such as jobs, education, healthcare and access to justice, amongst others, are all related to the SDGs.

The Guidance Note was developed with the assistance of the United Nations Development Programme (UNDP) Pacific Office in Fiji through its Fiji Parliament Support Project (Phase II), which is jointly funded by the Governments of New Zealand, Japan and Australia.

Titled, Oversight of the Implementation of the SDG: Guidance Note for the Standing Committees of the Parliament of the Republic of Fiji, the publication contains tangible and concrete actions that Committees can take to improve their oversight role in tracking progress towards achieving the SDGs.

In his address at the launch of the Guidance Note, the Speaker of the Parliament of the Republic of Fiji, Honourable Ratu Epeli Nailatikau, acknowledged the partnership that was leveraged to produce the toolkit and reaffirmed Fiji Parliament’s commitment to improving the lives of people in Fiji.

“The SDGs are a robust framework around which parliament can base its strategic plans and pursue its own oversight and accountability work and we look forward to the continuation of a strong partnership between the Parliament of Fiji, UNDP and other development partners,” said Hon. Ratu Nailatikau.

“The SDGs are an opportunity for parliamentarians to demonstrate their commitment to improving people’s lives and the health of the planet.”

“A key priority for government is the localization of the SDGs, which includes clear targets and baselines.” He added, “Therefore, SDGs monitoring, and oversight should be mainstreamed into the parliament’s legislative process and oversight functions – the achievement of the SDGs requires engaged and committed parliaments in order to enable governments to act, while holding them accountable to their commitments.”

In 2017, the Fiji Parliament made history by being the first Parliament in the world to carry out a self-assessment exercise on the SDGs.

“The guidance note is a direct follow up to the findings and proposed action plan of the parliamentary SDG self-assessment that recommended producing a toolkit for the committees to undertake monitoring and assessment of the SDGs related to their respective subject areas,” said Hon. Ratu Nailatikau.

He added, “It is a living document that will be periodically updated and refined with feedback, lessons-learned and case studies from on-going efforts related to parliamentary committee oversight of SDG attainment progress.”

The SDGs were adopted, as an integral part of the ‘Transforming our World: the 2030 Agenda for Sustainable Development’, by all 193 Member States of the UN on 25 September 2015.

Also referred to as the Global Goals, the ambitious plan to end poverty, protect the planet and ensure that all people enjoy peace and prosperity, came into force on 1 January 2016 and has 2030 as the target date for achievement.

In echoing the significance of the launch, Resident Representative a.i. of the UNDP Pacific Office in Fiji, Vineet Bhatia, congratulated Fiji Parliament on the Guidance Note and on Parliament’s commitment to participate and effectively engage in Fiji’s development process.

“It is widely acknowledged that good governance processes need to be inclusive and participatory. To engage meaningfully, citizens need to know about Agenda 2030, and local actors (including parliament, civil society, private sector, and communities as a whole) have to be engaged in a meaningful way and play their role in implementation,” said Bhatia.

“Parliament’s mandate offers you as MPs an opportunity to increase your engagement in national development and monitoring progress towards the SDGs therefore, ensuring better development outcomes for your citizens.”

He added, “Standing Committee members are uniquely positioned in parliament to champion the SDGs and provide effective oversight of their progress. This Guidance Note provides Committees with the necessary direction to integrate the SDGs into their everyday work: by mainstreaming the SDGs monitoring and oversight into the Committees’ legislative and oversight functions.”

The Guidance Note has been developed for the Fiji Parliament Committees to promote and improve Committee engagement in the achievement of the SDGs.