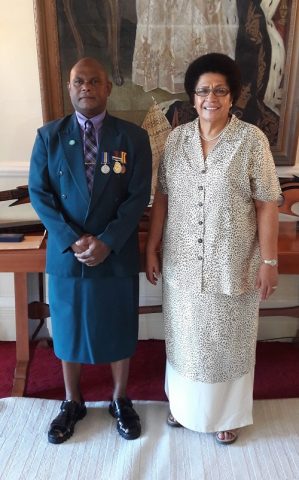 Penijamini Valebuli’s act of bravery has not only brought pride to his loved ones but also to his work family.

And after receiving his second medal from His Excellency, the President Major-General (Ret’d) Jioji Konrote during the Fiji Investiture Ceremony for the 2016 National Honours Roll at State House last Friday, 43-year-old Penijamini Valebuli continues to bring pride to the Fijian Parliament family.

Mr Valebuli was awarded the President’s Medal for saving his four colleagues, two education officers and a few other hotel occupants during the onslaught of TC Winston in February 20th, last year while on Taveuni for the Parliament’s community awareness programme.

The Nadrala native in Nadroga was among 60 Fijians who were awarded by the President last week for their act of heroism and distinguished service.

In recognising his achievement, Speaker Hon.Dr Jiko Luveni and her staff hosted Mr Valebuli to a tea party yesterday as a token of appreciation for his continuous achievements and bravery while on duty.

Hon. Dr Luveni said Mr Valebuli’s achievement should be a motivation and aspiration to all staff to grasp what was beyond them.

“When Mr Valebuli braced himself and withstood the fury of TC Winston to save his colleagues and other hotel occupants, that was his finest hour, and we thank God for his never-ending love and compassion for allowing us to celebrate today,” she said.

“His bravery (Mr Valebuli) should be a reminder to all of us that we should brace ourselves to our duties. Heroism is the urge to serve others.”

“He is indeed an inspiration to all of us because of his personal commitment.”

In thanking the Speaker and staff, an emotional Mr Valebuli said the medal was not only for him but also for his Parliament family.

Meanwhile, Mr Valebuli first received a medal of honour from the late President, His Excellency Ratu Jiosefa Iloilovatu in 2001 for saving the Mace during the political upheaval in 2000.

Mr Valebuli works in Parliament as a Chamber orderly.