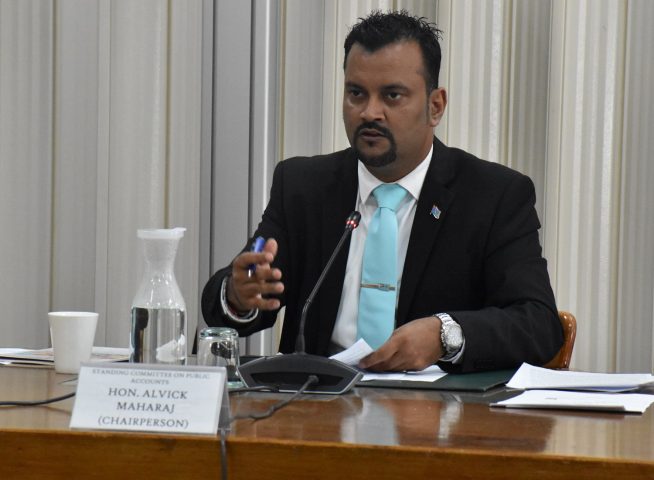 Parliament has achieved another milestone this week by airing live the public submissions to the Standing Committees on the Parliament television channel on Walesi platform and Parliament’s social media platforms and website.

The first-ever live Committee sitting was during the submission by the Ministry of Economy to the Standing Committee on Public Accounts on the Report on Performance Audit of Preparedness for Implementation of Sustainable Development Goals (Parliamentary Paper No. 63 of 2019) on Monday this week.

According to the Chairperson and Assistant Minister for Employment, Productivity and Industrial Relations Hon. Alvick Maharaj, the Committee was fortunate to be the first to air live its public hearing.

“I am fortunate and glad to be given the opportunity to be here and be part of the first Committee of the Fijian Parliament to air live our public hearing since the launch of the system by the Honourable Speaker, His Excellency Ratu Epeli Nailatikau late last year.

“It is a mark of an era for the Fijian Parliament to introduce its Video Live Broadcasting System,” Hon. Maharaj said.

Committee member Hon. Vijendra Prakash also thanked the Speaker, the Acting Secretary-General and the secretariat for the live coverage since it will now benefit the entire nation.

The Acting Secretary-General to Parliament Mrs Viniana Namosimalua said that Parliament is required by the Constitution to conduct its business in an open manner.

“This is a new service by the Parliament that allows members of the public to view discussions that are held by the standing committees on Bills, reports and documents that have been referred to them by the Parliament.

“These can be issues that affect the public and to which they can contribute when submissions are invited.  This is being fulfilled by airing the Standing Committee meetings through the Parliament channel on the Walesi platform and also through our Facebook platform.

“With the broadcast of standing committee meetings, there is now a wider coverage of viewers from all over the country and abroad, and that is what Parliament should be about, it is the House of the people and they should know what is happening in it,” Mrs Namosimalua said.

The six Standing Committees of Parliament are responsible for examining Bills and subordinate legislation, scrutinise the government departments, consider petitions and papers, review international treaties and conventions ratified by the Government and monitor their implementation, and perform any other functions and duties according to the rules and resolution of Parliament.

This new broadcasting service is made possible through the partnership between the Fijian Parliament and the United Nations Development Programme (UNDP) under the Fiji Parliament Support Programme funded by the governments of Australia, New Zealand and Japan.

Members of the public can now watch the Committee live sessions on www.parliamentlive.gov.fj; www.facebook.com/fijiparliament and the Parliament TV Channel on the Walesi platform, according to the Parliament Committees sitting schedule.