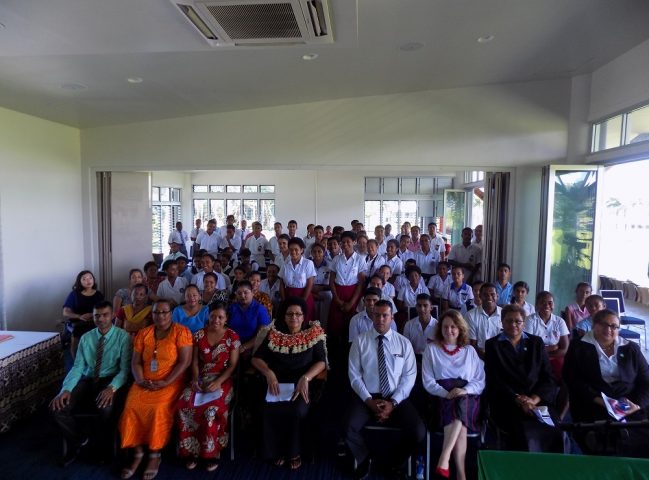 Speaker Hon.Dr Jiko Luveni and British High Commissioner to Fiji HE Melanie Hopkins with students and teachers at the celebration.

Ten orators from 10 different schools along the Suva-Nausori corridor took centre stage this morning to heighten awareness about the importance of Parliament’s role in peace-building.

As part of the Commonwealth Day celebration at Albert Park, the orators impressed the Chief Guest and Speaker Hon. Dr Jiko Luveni, special guest and British High Commissioner to Fiji HE. Melanie Hopkins, panel of judges, other invited guests and their fellow school mates with their presentations.

For Christopher, the win came as a surprise to him because it was his first-ever participation in such an event.

However, he was elated that he won, adding his participation was something that brought out the best in him to publicly urge everyone to help Parliament in its roles towards building peace.

Fellow orators Rishen and Grace shared similar sentiments, saying the competition was a platform to urge young people to assist in peace-building in our beloved country.

Hon. Dr Luveni said the Commonwealth Day was an opportunity for individuals, communities and organisations to promote the Commonwealth’s shared values of peace, democracy and equality, and to celebrate the association’s rich diversity.

She told the students: “When you develop a competitive spirit to compete with other students in your class, it can propel you to high levels of personal performance”.

“As you would have experienced, preparations for personal achievements requires drive and determination and intelligence to make the most of your God-given talents and abilities.”

Ms Hopkins, in her closing remarks, said it was enlighten to hear the dynamic presentations from the orators.

She said such presentations had injected new information about the Commonwealth Day celebration to the listeners as well as to her.

Ms Hopkins also encouraged students to be part of the move to create and foster peace-building in Fiji and the globe.

The celebration was funded by the Commonwealth Parliamentary Association (CPA) and the Parliament of Fiji.