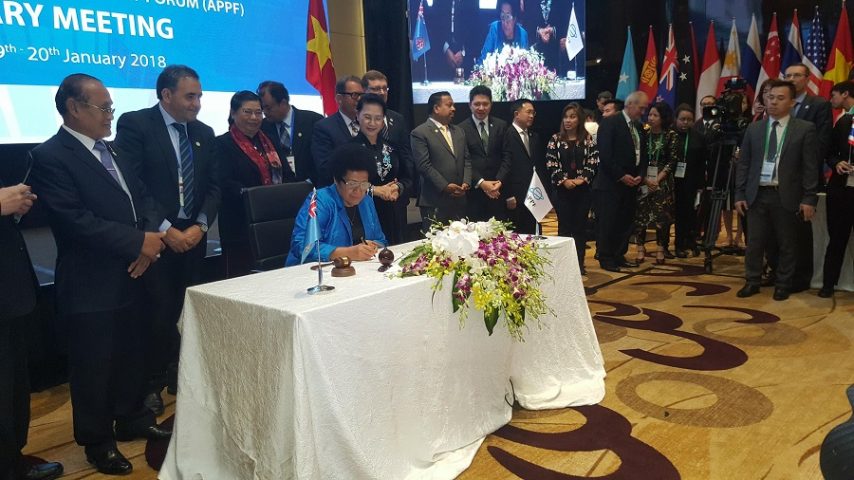 The 26th annual meeting of the Asia-Pacific Parliamentary Forum (APPF-26) ended on a high note in Hanoi, Vietnam on Saturday, 20th January 2018, with the adoption of the ‘Hanoi Declaration’ that outlined a new vision for the regional parliamentary forum.

Speaker, Hon. Dr Jiko Luveni was among 27 proud heads of delegations that signed the communiqué of the APPF-26 at the JW Marriott Hotel in the Vietnamese capital.

The ‘Hanoi Declaration’ marks the 25th Anniversary of APPF and charts out the course of development for the Forum towards 2030.  Chair of APPF26 and president of the National Assembly of Vietnam, Nguyen Thi Kim Ngan said the APFF needed to “continue refreshing its agenda and strengthening cooperation with multilateral institutions such as APEC [Asian-Pacific Economic Cooperation] and other cooperative mechanisms”.

An important feature of the Hanoi Declaration and a major achievement of APPF-26 was the amendment to the forum’s rules to allow the convening of a Women Parliamentarians Meeting as a permanent side-event. Women leaders at the meeting were delighted with this milestone achievement of the forum.

The declaration talks about how APPF will “shape a strategic and an inspirational vision” contributing to maintain and reinforcing peace, stability and prosperity in the region, as well as promoting multilateral efforts to cope with new challenges. It adds that to achieve this vision, the forum reaffirms that peace, stability and security are prerequisites for sustainable development.

The Hanoi Declaration also supports and aligns the APPF to the UN 2030 Agenda for Sustainable Development and Paris Agreement on Climate Change, calling on APPF members and their governments to “redouble efforts and coordination in implementing” these global initiatives.

A total of fourteen (14) resolutions were also passed at the session, including those on promoting gender equality, economic growth and free trade, and join actions on climate change response; supporting micro, small, and medium-sized enterprises in digital age; parliamentary diplomacy for peace, security and prosperity in the region and in the world, among other issues.