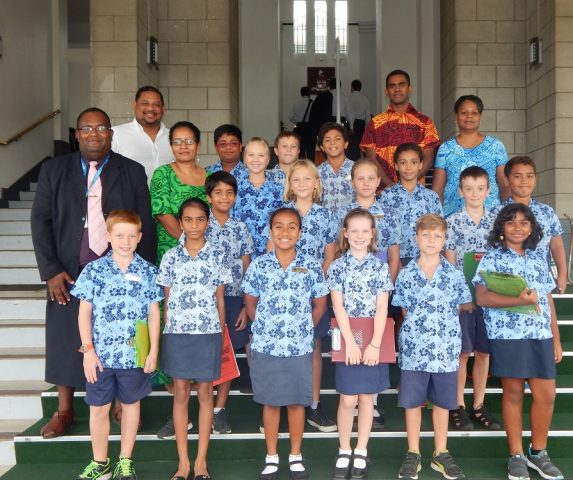 Students of Nadi International School with their teachers outside Parliament.

Sixteen students of Nadi International School counted themselves blessed for being part of the Parliament sitting on Wednesday afternoon.

Even though it was their first-ever educational tour of the prominent institution, they felt so sociable, and mingled with staff and asked many questions about Parliament to help them better understand how it operates.

Year Six and school head boy Lachlan Swift labelled the visit as “an educational one”.

Lachlan said they were privileged to be part of the live Parliament sitting, adding it was really eye-opening.

“We only see live sitting on TV, but now for us to witness first-hand what happens in the Chamber, it’s really very educational and something we are proud to be part of,” he said.

“We see Members of Parliament debate on certain issues and it’s interesting to be there to observe how they handle such issues.

“The atmosphere in such a live Parliament sitting is very lively and worth observing and I thank the Parliament staff for giving us this opportunity.”

Fellow classmate Kitione Kumeroa shared similar views, saying he was thankful to have been part of the live sitting.

“It’s very educational and a good learning experience for me because it has now broadened my knowledge on how Parliament works,” he said.

“I hope to return one day, but this time, as a Member of Parliament.”