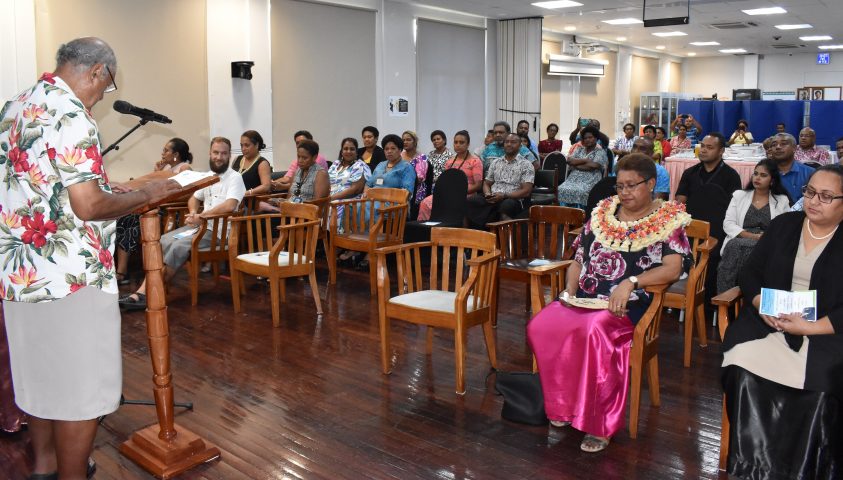 Former Secretary-General to Parliament, Mrs Viniana Namosimalua was highly commended by His Excellency the Speaker Hon. Ratu Epeli Nailatikau for her exemplary and diligent leadership since the re-establishment of Parliament in 2014.

During the farewell lunch hosted by the Department of Legislature on Friday, the Hon. Speaker noted that the results and outcomes of her stewardship of a constitutional office for the last seven years speak for themselves.

“Mrs Namosimalua had never backed-off since Day 1 as she led the secretariat to establish the supporting physical and human resource infrastructure that ensured Fiji had a functioning and effective Parliament.”

“Up to her last day in office, she persisted in ensuring that the Secretariat and Parliament facilities were up to standard and fulfilled the requirements of a functioning Parliament. This is not a task for the faint hearted. It requires a strong head, strong vision, resilience, discipline and great humility,” the Hon. Speaker said.

“This could not be without the backend support readily provided to the Parliament by the capable leadership of the Secretary-General.”

“I also wish to pay due recognition to Mrs. Namosimalua’s commitment in establishing and strengthening a strong partnership with our development partners, in particular, the UNDP under the Fiji Parliament Support Project. Today, we are enjoying the fruits of this partnership with the strengthening of MPs’ and staff capacity, and the provision of such an important facility such as our ICT infrastructure.”

“Mrs Namosimalua, on behalf of the staff, thank you so much for your dedication and inspired leadership as Secretary-General.”

Mrs Namosimalua while responding to the comments by the Speaker, said that she missed working under a great leader who was caring, firm and decisive.

“I look forward to coming to work everyday because of you Sir and I thank you very much for being a great leader, and it’s always a breath of fresh air in a politically-charged environment.”

Mrs Namosimalua also thanked the staff for being very supportive during her tenure as the Secretary- General and also thanked the UNDP Parliament Support Project team for their assistance and support over the years that has enabled Parliament to be what it is today.

Mrs Namosimalua had spent some 34 years in the Civil Service which included being the Secretary to Cabinet before she became the Secretary-General to Parliament in 2014.