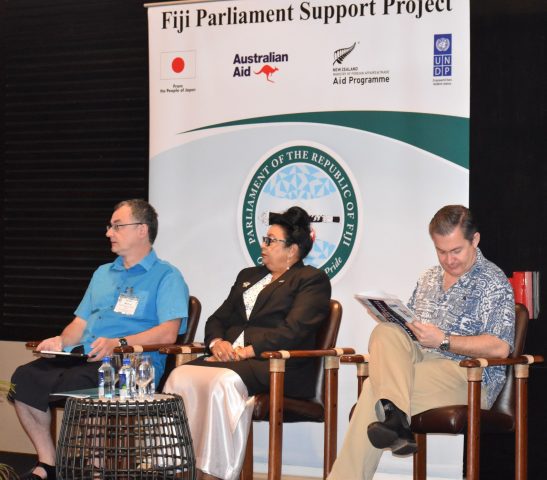 Parliament is the right place to tackle not only the legal regime around gender-based violence, but also to begin changing societal norms and stereotypes through a group of influential role models.

This was highlighted by the Deputy Speaker of the Fijian Parliament and Assistant Minister for Women, Children and Poverty Alleviation, Hon. Veena Bhatnagar while opening the seminar for Members of Parliament on Key Development Issues this morning, Monday 2 December 2019.

“Violence against women and girls is a global pandemic that affects 1 in 3 women in their lifetime.

“Other than being a violation of human rights, it is a form of gender-based discrimination and a barrier to gender equality and a barrier to women and girls realizing their full potential socially, economically and politically.

The Deputy Speaker said that one characteristic of violence against women and girls is that it knows no social or economic boundaries and affects women of all socio-economic backgrounds.

“While the focus is on “violence against women and girls,” it is important to remember that it is a matter that involves both men and women, boys and girls,” Hon. Bhatnagar said.

She noted that the Fiji Parliament is ahead of most other national legislatures in having Standing Order 110 (2) which requires Standing Committees to ‘give full consideration to the principle of gender equality to ensure all matters are considered with regard to the impact and benefit on both men and women equally’.

“In 2017, we were pleased to partner with the United Nations Development Programme (UNDP) on publishing a practical toolkit on ‘Scrutinising Legislation from a Gender Perspective’, an initiative to assist MPs in mainstreaming gender equality in their legislative and oversight functions.

“So, Parliament has indeed the framework and the tools in place to ensure positive gender equality outcomes for the Fijian people,” Hon. Bhatnagar added.

“Alliances like the CWP Fiji Chapter have been formed in many Parliaments globally, bringing together women MPs across party lines. Some of their achievements, as documented by the Inter Parliamentary Union (IPU), include successfully highlighting the need to legislate on issues relevant to women and gender equality, and particularly domestic violence, non-discrimination, healthcare and women’s rights. The inclusion of men in women’s caucuses has also been beneficial to this outcome.

“IPU has also noted that Women’s caucuses have been most effective when their members have deliberately put aside party differences, when they have a clear understanding of the caucus’s mission and goals as well as sufficient funding,” Mr Bouadze said.

He also highlighted that Gender Sensitive Parliaments are founded on the principle of gender equality – that is, that both men and women have an equal right to participate in its structures and processes, without discrimination and without recrimination.

“Gender equality is not guaranteed simply by the presence of women in parliament. Amongst others, a lot also depends on a parliament’s gender sensitivity and awareness, its policies and infrastructure.”

The four-day seminar will feature national and international gender experts from the Fiji Programme Support Facility (The Facility), the Ministry of Women and Ms Anna Burke, former MP and former Speaker of the House of Representatives of the Australian Parliament & IPU Consultant on Gender Sensitive Parliaments.

Other sessions will feature representative from Ministry of Economy, who will give an overview of the National Development Plan and links to the SDGs, a session on media training and information session by Government Ministries and Statutory Bodies for the six Standing Committees of Parliament.