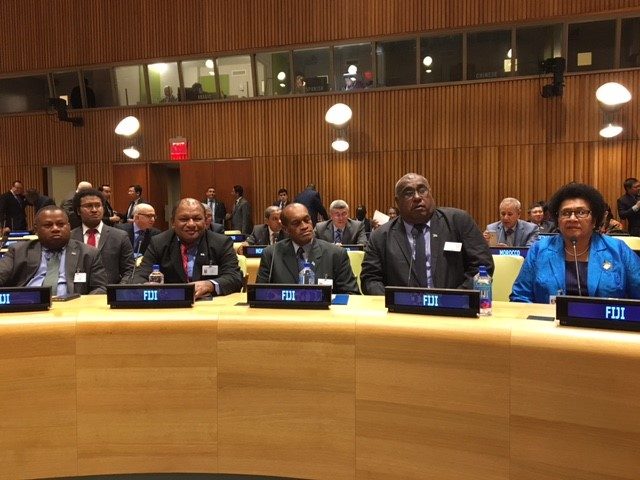 Speaker of Parliament of the Republic of Fiji, Hon. Dr. Jiko Luveni attended the Annual Parliamentary Hearing of the Inter-Parliamentary Union at the United Nations headquarters in New York from 13-14 February 2017.

The main focus of the Inter Parliamentary hearing was on ocean issues under Sustainable Development Goal 14, with the theme “A World of Blue: Preserving the oceans, safeguarding the planet, ensuring human well-being in the context of the 2030 Agenda”.

The Fiji Delegation emphasised the importance of the ocean to Pacific Small Island Developing States and our dependence upon it for our livelihood.

In the margins of the first day of the Hearing, the Hon. Speaker had a bilateral meeting with Mr. Martin Chungong, the Secretary-General to the IPU. She updated Mr Chungong on the progress of activities implemented so far by the Fijian Parliament under the IPU.

Mr. Chungong commended the Hon. Speaker on the successful undertaking of the Asia-Pacific Parliamentary Forum (APPF) hosted by Fiji at the Intercontinental Resort in Natadola last month.

On 15-16 February, the Fiji delegation will be attending the Preparatory Meeting for ‘The Ocean Conference’, to be co-hosted by Fiji and Sweden from 5-9 June 2017 at the UN Headquarters in New York. The delegation will also be attending other bilateral meetings during the week.