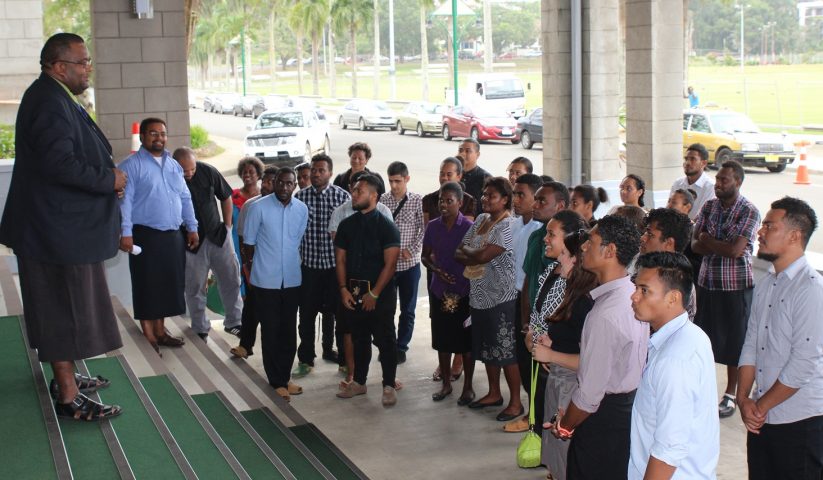 Forty seven students of Fulton College in Nadi achieved one of their personal dreams when they visited the Parliament of Fiji for the first time on Tuesday, September 6th, 2016.

The official visit has been labelled by the students as “educational and eye-opening”.

Apart from being informed of the roles and responsibilities of Parliament, the students also had the lifetime opportunity to visit the Chamber, Small and Big committee rooms and also had a tour of the Parliament Discovery Center.

Speaking on behalf of the students, College lecturer, Mr Babitu Kataiwai said the visit was timely as the students were presently learning about Government in their Economics class.

“These are first-year Business students who are progressively learning about government operations and for them to be here is indeed eye-opening,” Mr Kataiwai said.

“This is the first-ever trip we’ve ever made to Parliament and we are so appreciative to the Speaker and the Secretary-General for allowing us to visit.”

“For these students, coming down here to learn first-hand from the Parliament Education team is something that will really boost their studies and we are so grateful for this opportunity.”

Mr Kataiwai added that whatever the students learned theoretically about Government and Parliament was not as persuasive enough compared to actually visiting the prestigious organisation.

“Now that we have visited, students will be able to have a vivid idea of how laws are made in our country, who are responsible for making them, how the Parliament works and its history, among other important issues,” he said.

“Fulton College would also like to sincerely thank the tour facilitators for the very informative session.”

“The college is also hoping to make more Parliament visits for the benefit of its students.”