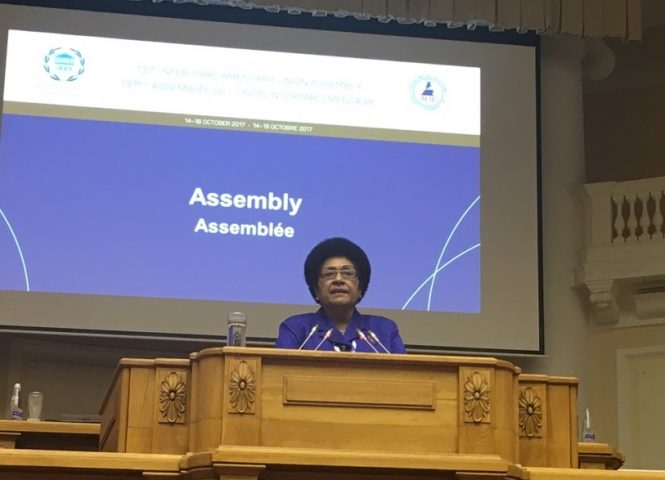 The Hon. Speaker stated that the Fijian Parliament recognises that cultural pluralism and peace are important conduits for the achievement of the 2030 Agenda for sustainable development. She further added that the Fijian Parliament is adamant to continue to encourage legal, regulatory and policy frameworks that are inclusive and ensure that all citizens regardless of ethnicity, culture and religion are fully covered under the Bill of Rights of the Constitution and have equal access to the basic needs of life.

Whilst delivering her concluding remarks, the Hon. Speaker reiterated that since Fiji stands on the constitutional foundation of an inclusive society, the Fijian Parliament will continue to complement the work of the existing institutions of democracy, in efforts to encourage dialogue, respect, and build capacities for co-operation towards harmony and peaceful co-existence.

In a separate side event, the Minister for Employment, Productivity and Industrial Relations Hon. Jone Usamate addressed the IPU Standing Committee on Sustainable Development, Finance and Trade which discussed a draft Outcome Statement on climate change that will be debated at an IPU event at COP23 in Bonn, Germany. The key message from Hon. Usamate was that it was time to bring the Paris Agreement to life and COP23 needed to ensure that commitments were made and kept. He further emphasised the need to keep global temperature growth to 1.5 degrees celsius and the need for accessibility to funding assistance.