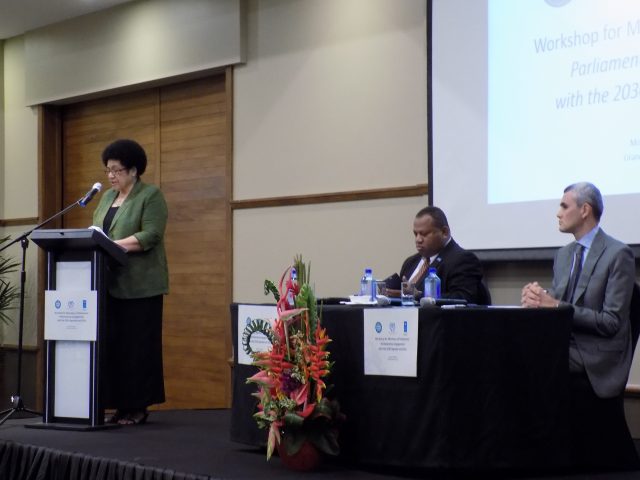 The Fijian Parliament has made history for being the first in the world to carry out a self-assessment exercise on the Sustainable Development Goals (SDGs).

While delivering a congratulatory statement from the Inter-Parliamentary Union (IPU) to some Members of Parliament (MPs) during a workshop on the Parliamentary Engagement with the 2030 Agenda and SDGs early this week, Minister for Agriculture, Rural & Maritime Development and National Disaster Management, Hon. Inia Seruiratu stated that this was a milestone achievement.

Hon. Seruiratu said; “This exercise shows strong commitment and domestic ownership of the SDGs and sets a good example for other parliaments to follow suit. This workshop and the SDG self-assessment represent the continuation of a strong partnership between the Parliament of Fiji and the IPU”.

“The self-assessment that is being undertaken with the assistance of the IPU may conclude with an action plan that will set out concrete activities and areas of engagement for the Parliament of Fiji  and the IPU and UNDP would be happy to support the implementation of this plan,” he said.

Although Fiji joined the IPU recently, Hon. Seruiratu said it had already taken the lead role on issues ranging from the SDGs, Gender Equality, to Human Rights.

“The IPU has asked me to convey that they are proud to have worked and learned from the Fijian Parliament about how it engages in these areas and delivers for its citizens.”

Speaker of Parliament Hon. Dr Jiko Luveni said she was proud that the Fiji Parliament was taking the lead in engaging with the SDGs.

“Parliament is doing its part to mainstream the SDGs into its work such as legislative scrutiny, civic education and capacity-building for MPs and the secretariat,” Hon. Dr Luveni said.

“We recognise the importance of international cooperation and conferences to stay up-to-date on what’s happening and to be part of the international network working on the SDGs.”

Mr Bakhodir Burkhanov acknowledged the Fijian Parliament for embracing the vision of development, equity and peace embodied in the SDGs.

“Over the past months and years, MPs have had several sessions to deliberate what SDGs mean for Fiji and I would like to commend the Honourable Speaker for her leadership in keeping this important agenda central to many deliberations on the floor of the Parliament, and in various public discussions, notably the Speaker’s Debate,” he said.