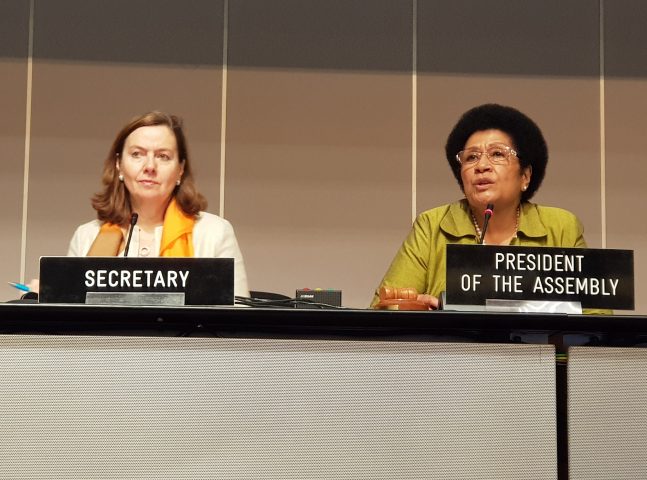 A delegation led by the Speaker of Parliament Hon. Dr Jiko Luveni is in Geneva, Switzerland for the Inter-Parliamentary Union (‘IPU’) 139th Assembly. The Fijian delegation comprises the Minister for Women, Children and Poverty Alleviation, Hon. Mereseini Vuniwaqa and secretariat support staff. The IPU Assembly and its related meetings commenced on Sunday, 14 October 2018 and continue through Thursday, 18 October 2018.

The General Debate at the Assembly continues to see parliamentary debate and knowledge on the role of science as an enabler of dialogue. The week-long meeting will cover an array  of topics including: how can parliaments and parliamentarians better promote and develop science, technology, innovation and Science, Technology, Engineering and Mathematics (‘STEM’) education; how can more young people, particularly young women, be encouraged to pursue scientific and engineering studies; can science help create the conditions for multilateral talks and facilitate diplomacy; how can parliamentarians tackle the problem of digital literacy; what are the good practices of international scientific cooperation models that are conducive to dialogue and peace; and how can parliaments support the implementation of the 2030 Agenda for Sustainable Development, in terms of science, technology, innovation and STEM education.

In a side meeting, the Fijian Parliament, in partnership with the Seychelles Parliament, co-chaired the third meeting of Parliamentarians from Small Island Developing States (‘SIDS’) including Tonga, Samoa and the Federated States of Micronesia. The meeting focused on the finalisation of an emergency item resolution on climate change following the release of the IPCC Special Report on Global Warming of 1.5°C. The Report advances the  understanding of global warming of 1.5°C, predicts the impacts and risks associated with climate change, identifies emission pathways consistent with 1.5°C  and provides guidance on strengthening the global response to climate change, sustainable development and efforts to eradicate poverty.

The emergency item resolution was approved by the Assembly for inclusion on the Agenda, drawing support from 1106 votes with 311 votes against and 248 votes in abstention. The emergency item resolution was referred to the Drafting Committee for vetting and finalisation, and will be subsequently submitted to the Assembly for adoption on the penultimate day.

The Speaker Hon. Dr Jiko Luveni was also requested by the IPU President Hon. Gabriela Cuevas Barron to Chair a session of the IPU plenary during the general debate on Parliamentary leadership in promoting peace and development in the age of innovation and technological change

The Hon. Speaker also participated as a panelist during a side event coordinated jointly by the IPU, UNDP and the Pew Research Centre. The event focused on the thematic area: ‘Exploring evolving understandings of the social contract through the analysis of citizen perceptions.’

Hon. Luveni stated that by changing the nature of corporations, having a strategic government and having the different responsibilities of citizens we can both evolve the nature of the social contract and also repair it. Hon. Luveni also provided practical examples from the Fijian context whereby Fiji is now providing grants to small and micro businesses to capitalise on the entrepreneurial spirit and also providing training on financial management and savings; and the Ministry of Women hold an annual women’s expo where it provides market access for businesswomen and promotes women entrepreneurship and economic development.

In giving her closing remarks, Hon. Luveni stated unequivocally, “We can see how inclusivity of the social contract and the extent to which it is owned across multiple segments of society and how these are key factors in determining a community’s social cohesion levels. Having said that, I am optimistic that leaders in governments and in the private sector and CSOs are working out a new contract for the 21st century.”

The 139th IPU General Assembly will conclude on Thursday, 18 October 2018.