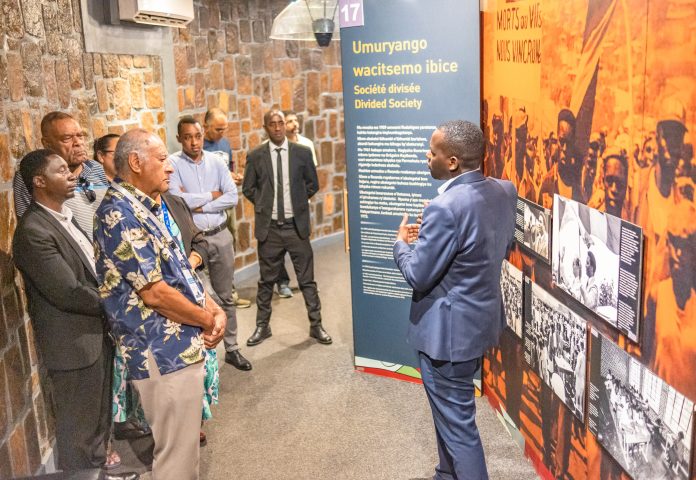 The Fijian Parliament Delegation to the 145th Inter-Parliamentary Union (IPU) Assembly and Related Meetings in Kigali, Rwanda visited the Kigali Genocide Memorial on Fiji Day. It was a special Fiji Day appointment for the delegation.

At the end of a full guided tour of the Memorial, the Honourable Speaker laid a wreath on one of the graves of the Rwandan Genocide victims. The Kigali Genocide Memorial is the final resting place for more than 250,000 victims of the Genocide. One of the goals of the Memorial is to educate people about genocide and to prevent future mass atrocities and genocides in Rwanda and around the world. It also provides a documentation centre to record evidence of the genocide, the testimonies of genocide survivors and the profiles of genocide victims. The Memorial also provides support for survivors, in particular orphans and widows.

Meanwhile, apart from the pre-conference meetings that began on 8th October, the 145th IPU Assembly plenary commenced on Tuesday, 11th October, at the Kigali Convention Center (KCC). The theme of this year’s Assembly is Gender equality and gender-sensitive Parliaments as drivers of change for a more resilient and peaceful world.

Over a thousand delegates from the 178-member Parliaments of the IPU are gathering in Kigali, Rwanda for the annual assembly. The IPU Assembly provides an opportunity for the global community of national Parliaments to come together to strengthen Parliamentary efforts to drive change and address global issues.

During the 145th IPU Assembly and related meetings, Parliamentarians will debate and deliberate their views with the goal of reaching agreements and consensus on legal frameworks, policies and actions encompassing the theme.

The Assembly ends on Saturday, 15 October.