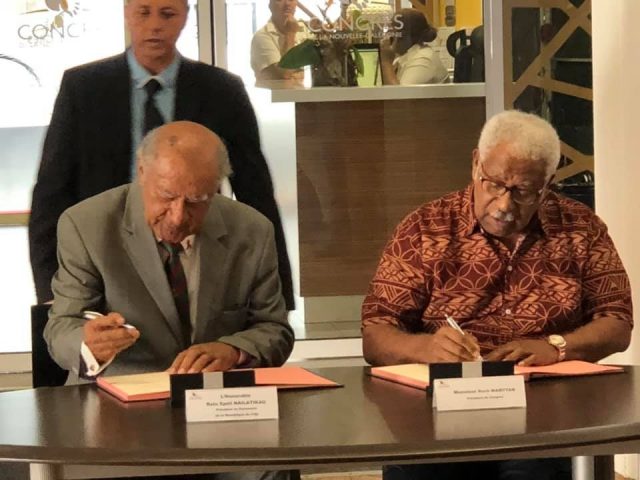 The leaders of the New Caledonia and Fiji Parliaments have signed an agreement on Tuesday, 26 November, 2019 in Noumea to strengthen working relationship between the two institutions including training opportunities and professional development for its Members of Parliament and secretariat staff.

The agreement, in the form of a Memorandum of Understanding (MoU) formalizes the mutual interaction and strengthens the existing relationship between the two institutions at the strategic and working level, focusing on information exchange, regular dialogue and exchange visits by the two Parliaments to foster links between MPs and staff.

In his keynote address, HE Speaker of Parliament, Sir Ratu Epeli Nailatikau said, “The gesture to invite me to your beautiful country to sign the MoU today is not only a symbol of intention to work together, but also a statement of an already existing close relationship and how we seek to strengthen it”.

He added, “I believe that this forum will bear the fruit of many practical outcomes not only between our two parliaments but also develop more cooperation between our two countries”.

HE Ratu Epeli further added, “Proactively building relationship – being intentional and deliberate about fostering increased understanding, greater cooperation and shared growth will benefit both the New Caledonian Parliament and the Fijian Parliament.”

After the signing of the MoU, HE Sir Ratu Epeli also presented Fiji Parliament’s inter-parliamentary cooperation within the region and beyond. He highlighted that the Fijian’s Parliament immediate aim after the election was to be internationally active and share the current tendency of all parliaments, which is to participate more actively in the different international parliamentary organizations, and to engage and benefit from the parliamentary support of more developed forms of multilateral and bilateral cooperation.

He added that since the last term, the Fijian Parliament has benefited from established parliaments such as the State Parliament of Victoria, the Australian Federal Parliament and the New Zealand Parliament.  In addition, UNDP, IPU and CPA have come forward to provide niche resources for the Fijian parliament recognising the potential of our parliament to promote good governance, political inclusion, economic prosperity and social justice.

Within the frame of his visit to Noumea, H.E Sir Ratu Epeli also met with the Senate of Customary (Traditional) Leaders, the French Ambassador to New Caledonia, the President of New Caledonia and members of his Cabinet.

HE Sir Ratu Epeli was accompanied by the Acting Secretary General to Parliament Mrs Viniana Namosimalua during the visit to Noumea, New Caledonia for the signing of the MoU.