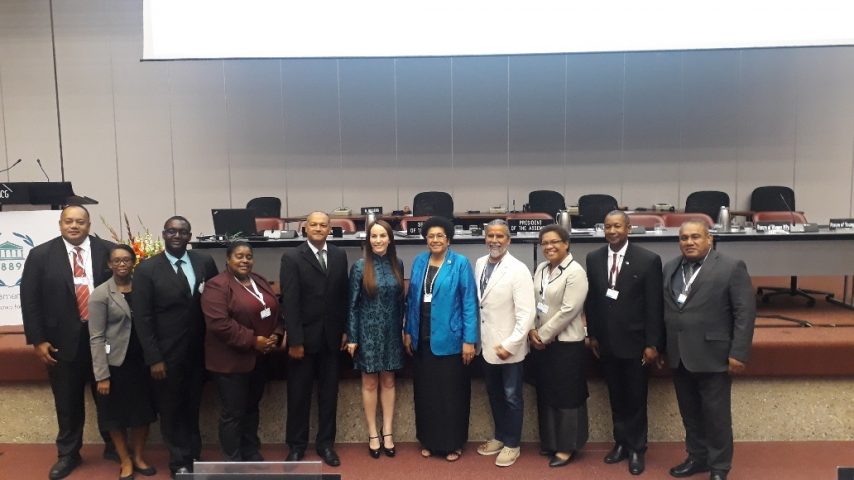 The Inter-Parliamentary Union (‘IPU’) 139th General Assembly has unanimously adopted the emergency item resolution entitled “Climate Change – Let us not cross the line”. The emergency item was submitted by the Small Island Developing States (‘SIDS’) – comprising Fiji, Seychelles, Tonga, Samoa and the Federated States of Micronesia – following the release of the IPCC Special Report on Global Warming of 1.5°C.

The emergency item resolution was debated and approved by the Assembly on Monday 15 October 2018, for inclusion on the Assembly Agenda, drawing support from 1,106 votes with 311 votes against and 248 votes in abstention. The emergency item resolution was then referred to the Drafting Committee for vetting and finalisation. On Wednesday 17 October 2018, the rapporteur from the Drafting Committee submitted the finalised draft to the Assembly whereby it was put to the vote and subsequently adopted unanimously.

It was an unprecedented historical moment in the history of the IPU noting that unanimous vote has never been achieved for emergency item resolutions submitted. Not only is this a victory for the sake of SIDS but rather for the sake of humanity.

As alluded to by the Minister for Women, Children and Poverty Alleviation Hon. Mereseini Vuniwaqa during the debate, “This is one of those resolutions that should have everybody unanimously voting in favour. Why? Because climate change will affect all of us in a way that wars and famines won’t. Climate change knows no border. It knows no geographical limitations. Yes, the impact may be different depending on whether you are surrounded by sea or not but I tell you one thing – if it isn’t rising sea level that will get you, category 5 cyclones will; earthquakes will; floods will or some other natural calamity that you may have never experienced before as a country.”

Hon. Vuniwaqa further stated, “SIDS are big on climate change – simply because we are feeling the ramifications more than you today due to our heavy reliance on the sea that surrounds us and in the Pacific region, the effects of climate change include significant temperature increases, changing rainfall patterns, sea-level rise, floods and more intense tropical cyclones.”

“You see ladies and gentlemen, for us climate change threatens our very existence,” said Hon. Vuniwaqa. “So I call on all of you as Members of Parliaments representing the millions of voices around the world to stand together with us and agree to act on the IPCC report. As parliamentarians we have a vital duty to ensure that our NDCs are met; deliver key outcomes not only to the Pacific; and preserve and advance global climate consensus.”

In giving her closing remarks, Hon. Vuniwaqa reiterated that the task for Members of Parliaments is relevant now more than ever, and they need to maintain their stance to maintain global solidarity to make a difference.