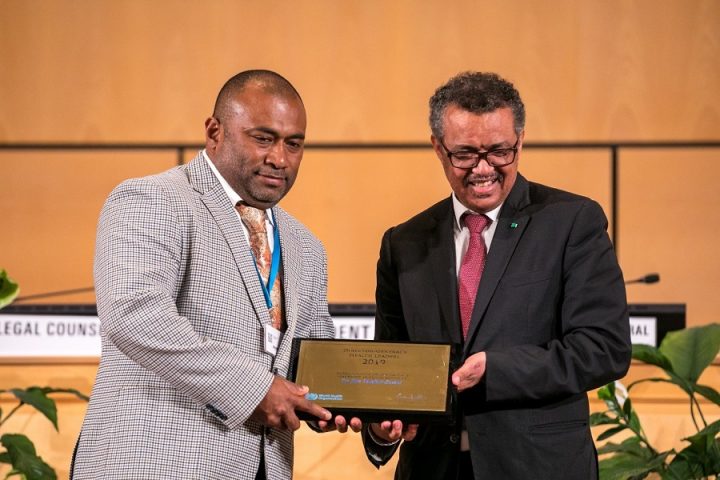 Recognizing her significant contribution to health, Fiji’s former Speaker of Parliament and tireless health advocate Dr Jiko Luveni, has been posthumously recognized at the 72nd World Health Assembly, receiving a Global Health Hero Award from the World Health Organization (WHO).

The award recognises those who have championed the cause of health, successfully influenced political agendas, and contributed to raising awareness on health issues globally.

Announcing the award at the World Health Assembly (WHA) in Geneva last night, Ms Lori Sloate, Moderator of the High Level Segment, said Dr Luveni was a committed and passionate champion for health, social welfare and women, noting, “Her work in both health and politics made a significant impact both locally and internationally.”

Accepting the award on Dr Luveni’s behalf, Fijian Minister of Health & Medical Services Dr Ifereimi Waqainabete said: “I am deeply honoured to receive this award on behalf of the late Dr Jiko Luveni, for her tremendous contributions towards the development of Fiji’s health sector, women and sports. Many of the achievements we have made in service delivery for people living with HIV/AIDS, and social protection, can be directly attributed to her efforts.”

Dr Corinne Capuano, Director of Pacific Technical Support and WHO Representative to the South Pacific, praised Dr Luveni’s work: “Dr Luveni was a true champion of health. She was committed to improving the lives of others, and worked tirelessly for the people of Fiji, and beyond. While she is missed, her legacy is significant, and we’re delighted to see her recognized globally.”

The first Fijian woman to graduate as a dentist from the Fiji School of Medicine, Dr Luveni was a life-long health and social advocate. In 2014, she became the first female Speaker of the Parliament in Fiji, a position she held until tragically passing away in December 2018.

As a dentist she provided services across Fiji, before moving on to a range of public health positions domestically, and internationally. With WHO, she undertook advisory assignments in health education in Malaysia, Japan and Tanzania.

As a Fijian Member of Parliament, she served as Minister of Social Welfare, Women and Poverty Alleviation. In this role, Dr Luveni supported more than 1,300 women’s groups throughout Fiji. Furthermore, the social welfare reforms she led increased those receiving essential government benefit support from 21,000 to more than 60,000, and ensured those over the age of 70 without any form of income are able to receive a pension.

This is the first year that Global Health Heroes have been recognized during the World Health Assembly. Recipients from the other regions include: