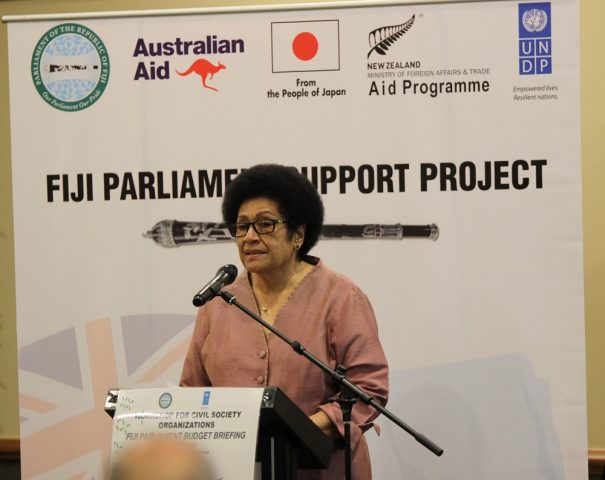 In recognizing the importance of budget transparency and the role of civil society’s ability to analyse budgets and effectively participate in the National Budget process, more than 90 representatives of CSOs gather in Suva for the second CSO Budget Briefing.

The event was organised by the Parliament of the Republic of Fiji in partnership with the United Nations Development Programme (UNDP) Pacific Office in Fiji through its Fiji Parliament Support Project (FPSP) II.

In opening the one-day workshop, the Honourable Speaker of the Republic of Fiji, Hon. Dr. Jiko Luveni, highlighted the importance for Parliament to provide information to citizens on the role of Parliament in discussing and approving the budget as well as providing information on the content of the budget.

“One of the roles of the national legislature is to ensure that information on the Budget is made accessible to the public and CSOs in a meaningful way,” said Hon. Luveni.

“We are very much aware that strengthening CSOs ability to analyse budgets and participate effectively can play an integral role, not only in policies and service delivery but also in constructing a more open and participatory democracy.”

Through an initiative called “Floating Budget Analysis Office”, the Fiji Parliament was able to benefit from a team of parliament researchers from New Zealand, New South Wales, Victoria, Solomon Islands and Tonga in creating sector briefings which have been developed for Members of Parliament to help inform budget debates.

The Sector briefings developed by the Fiji Parliament provide information to Members of Parliament, CSOs and the general public on the different allocations highlighted in the National Budget.

“Budget transparency is an important element of democracy around the world,” said the New Zealand Government’s High Commissioner to Fiji, H.E. Johnathan Curr, in his opening remarks.

Reflecting on the Floating Budget Analysis Model, H.E. Curr said “this is an excellent example of regional information exchange and knowledge sharing, and a real credit to Fiji’s Parliamentary team that they are now in a position to be providing these opportunities to other Pacific Island countries.”

“CSOs have important roles to play in the scrutiny of budget figures when announced, and in the oversight of budget implementation. This workshop is intended to provide information and analysis on the new budget, and the budget process, which will help to enable CSOs to actively participate in the process.”

The President of the Spinal Injuries Association, Joshko Wakaniyasi, found the format of the short budget briefs to be useful as it will allow CSOs to better understand the budget and then inform their members on the impact of the budget on their members.

“I found the analysis very interesting as the documentation (of the National Budget) is too big to fully understand,” said Wakaniyasi.

“The analysis in the briefs allows us to look in depth into specific areas and which then informs our lobbying strategies and what type of engagement and consultation we will need to do.”

The CSO workshop follows the first reading of the Budget in Parliament on Thursday 28th June. The Fiji Parliament will sit again next week to discuss and vote on the budget