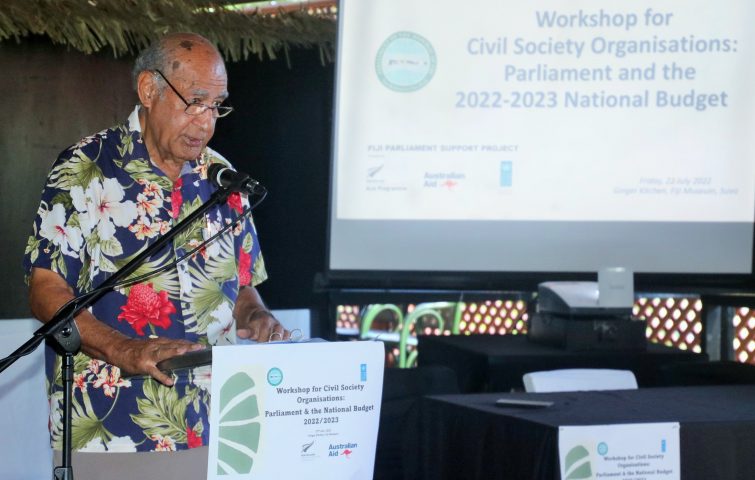 According to the Speaker of Parliament His Excellency Hon. Ratu Epeli Nailatikau, the workshop aimed to strengthen and inform civil society groups on the Parliamentary processes, such as the passing of the national budget.

“This is a continuation of our past efforts to strengthen Parliamentary openness and inclusivity in the Parliamentary processes such as the passing of the national budget, legislative reviews and oversight.”

During his opening remarks, Hon. Nailatikau emphasised the importance of CSOs in the budget process.

“For civil society organisations, you play an important role in conveying information on the budget process to your interest groups and local communities. You also have an important facilitator role in representing the needs, sentiments and aspirations of citizens to their representatives in Parliament.”

“CSOs can help improve budget policies by providing information on public needs and priorities through their connections with citizens, communities, and sectors,” added Hon. Nailatikau.

“I look forward to this workshop to better understand the budget process in Parliament, especially the major sectoral components such as education, health, infrastructure and the changes in revenue policies,” said Mr Tuicakau.

Participant from the Rainbow Pride Foundation/Nausori District Council of Social Service, Mr Lee Domonakibau anticipated on understanding and delivering information learned from the workshop in terms of the national budget to the community level.