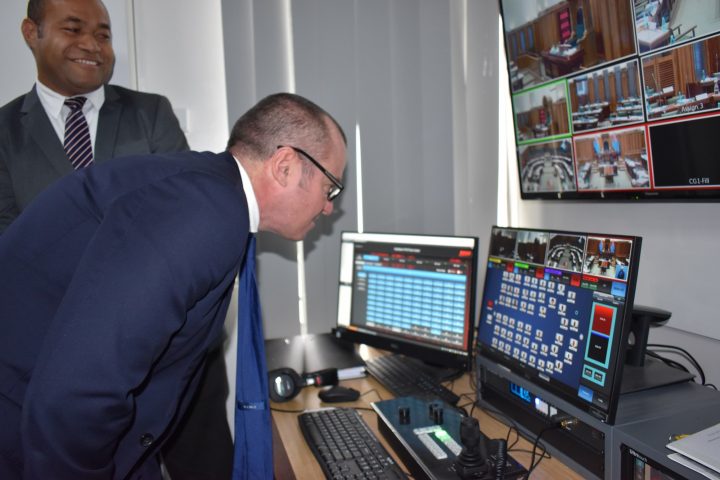 Parliaments need to be able to make good use of Information and Communication Technologies (ICT) tools that are shaping the world of work, modifying interpersonal communication and stimulating political mobilisation.

For the Fijian Parliament, ICT is a core enabler of greater openness, accessibility and accountability, as well as a key channel for communicating with citizens.

These were the remarks made by the Speaker His Excellency Sir Ratu Epeli Nailatikau while launching the Parliament broadcasting equipment this morning, Tuesday 19 November 2019.

“Parliament derives its legitimacy from its core function as the people’s representative. Strong, democratic parliaments are therefore responsive to changes in society.

“I am, as most of you will know, one of those who see the broadcasting of Parliament’s work as one of the more effective methods of increasing people’s knowledge of Parliament and Government.

“By stimulating citizen participation in the work of parliament, effective parliamentary ICT systems will help Parliament in its core parliamentary roles of lawmaking, budgeting, oversight and representation.

“These initiatives builds on our achievements from the previous term and we aim to achieve far bigger and bolder than what our parliament has achieved previously,” the Speaker said.

H.E. Sir Ratu Epeli acknowledged the assistance by the United Nations Development Programme Fiji Parliament Support Project (FPSP), which is funded by the governments of New Zealand, Australia and Japan for the procurement, installation and commissioning of the broadcasting equipment.

Australian High Commissioner H.E. Mr John Feakes acknowledged the Speaker for his leadership and support to the FPSP by ensuring that the Fijian Parliament continues to place innovation at the forefront of its work.

“The broadcasting of Committee hearings is important to provide greater visibility in the work of Parliament, allowing the Fijian people to become more informed about what Parliament is doing and also to understand the great work being done by Committees.

H.E. Feakes also paid respect and acknowledged the contribution by the late Speaker, Hon. Dr Jiko Luveni in her vision regarding broadcasting of the Committee hearing and the Secretary-General to Parliament, Mrs Viniana Namosimalua and her team for their perseverance over the last 12 months to ensure that the project has been completed.