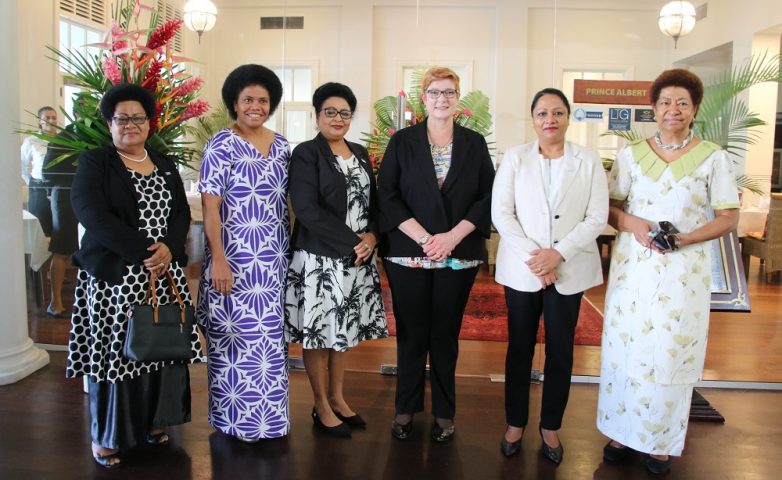 Australian Minister for Foreign affairs and Women Senator Marise Payne has commended the contributions of women Members of Parliament (MPs) to Parliament and to the society.

After the meeting this morning, Senator Payne said she was impressed to know that there are ten female MPs, some of whom are holding ministerial portfolios and other critical positions in Parliament.

“It was a privilege and an opportunity to meet with such impressive Members of the Fijian Parliament and to know that there are 10 female MPs who are all very experienced, making a great contribution, given their many and varied backgrounds.

“To meet with Ministers and Assistant Ministers, former Opposition Leader, shadow ministers and Deputy Speaker, it was a great honour for me and I admire their contribution enormously and look forward to working with them in future,” Senator Payne said.

Minister for Industry, Trade, Tourism, Local Government, Housing and Community Development Hon. Premila Kumar said it was an opportunity to share their stories, discuss why they joined politics and importantly, to meet a woman who holds a very important portfolio in Australia.

“It was an opportunity for all women parliamentarians to meet another woman Minister, whose holding a very important portfolio in Australia and it’s also amazing to see a woman who was the former Minister for Defence and now the Minister for Foreign Affairs.

“It was interesting just to share the different backgrounds we came from, why we joined politics, and collectively, we were able to share our stories and felt motivated about it,” the Minister said.

Opposition MP Hon. Lenora Qereqeretabua said it was a great honour to meet with the Foreign Affairs Minister and she believes that this is an opportune time for Fijian women MPs to go to Pacific island countries that have no women MPs, like Papua New Guinea and Vanuatu and to encourage women there to take part in politics.

Senator Payne continues her visit in Suva today before returning to Australia later this evening.