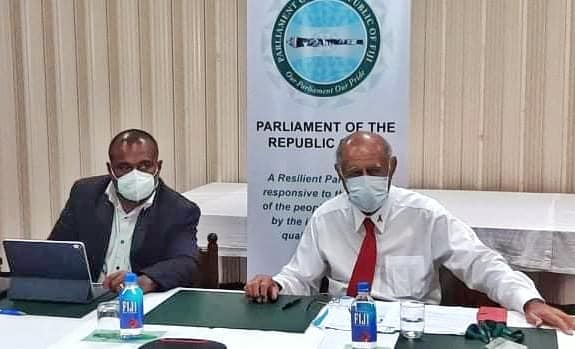 The Honourable Speaker of the Fijian Parliament His Excellency Ratu Epeli Nailatikau has commended the commitment of Parliaments and Parliamentarians in the Asia-Pacific for their continued engagement and interaction amidst the pandemic.

Hon. Ratu Epeli was speaking at the Ad Hoc Virtual Meeting on COVID-19 of the Asia-Pacific Parliamentarian Forum on Global Health (‘APPFGH’) held on Monday, 26 April 2021.

“The number of participants at today’s forum is testament to the commitment of Parliamentarians and Parliaments to the agenda of the APPFGH,” he said.

“Despite the pandemic and its devastating impacts on the health, economies, and movement of people in the Asia-Pacific region, it is good to acknowledge that Parliamentarians continue to hold in high regard your important role in the achievement of national, regional and global health priorities,” he added.

The Honourable Speaker was accompanied by the Minister for Health and Medical Services, the Honourable Dr Ifereimi Waqainabete who was one of the pre-selected speakers to update the Forum on Fiji’s situation.

The Honourable Minister updated the Forum on Fiji’s ongoing vaccination initiative as well as the actions taken by the Fijian Government to address the recent outbreak of the virus.

The meeting, facilitated by the World Health Organisation (WHO) Regional Office for the Western Pacific was the second of its kind since the declaration of the pandemic. The first one was held in 2019 and was attended by the Honourable Minister.

The Ad Hoc Virtual Meeting was an opportunity for the APPFGH members to discuss the COVID-19 situation in the region and in their respective countries. Such meetings are aimed at enhancing the role of Parliamentarians in continuing to support the national and global COVID-19 response.

During the meeting, the WHO also updated the forum on the pandemic situation in the Western Pacific and South East Asian regions.  In its update the WHO noted that ‘120 countries around the world and almost all in the Asia-Pacific Region that had received vaccines from the COVAX facility had rolled-out vaccines to cover priority’.

But it also highlighted that there were challenges that included inequity in access between high-income and low-income countries across the regions. There was also production capacities across the world that could not be rapidly scaled up. The UN health agency was however optimistic that these challenges could be overcome by ‘effectively using vaccines for priority populations and not wasting them’ and mobilising Governments and financial institutions to support solidarity in allocation and supporting initiatives for research and development, and scaling up vaccine production.

Additionally, the meeting also saw the handing over of the APPFGH Presidency from the incumbent Honourable Professor Keizo Takemi of Japan to Honourable Minseok Kim of the National Assembly of Korea.

Honourable Ratu Epeli gave his support to Honourable Kim, and also formally thanked Honourable Professor Takemi, noting the excellent leadership and stewardship of the APPFGH since its establishment in 2015.

The APPFGH is a platform for Parliamentarians to exchange ideas, build political will, strengthen capacities, and foster collaboration in driving sustainable action for health.

The Honourable Speaker is one of the two Vice-Presidents of the Forum.