100 million campaign launched for every child to be free, safe and educated 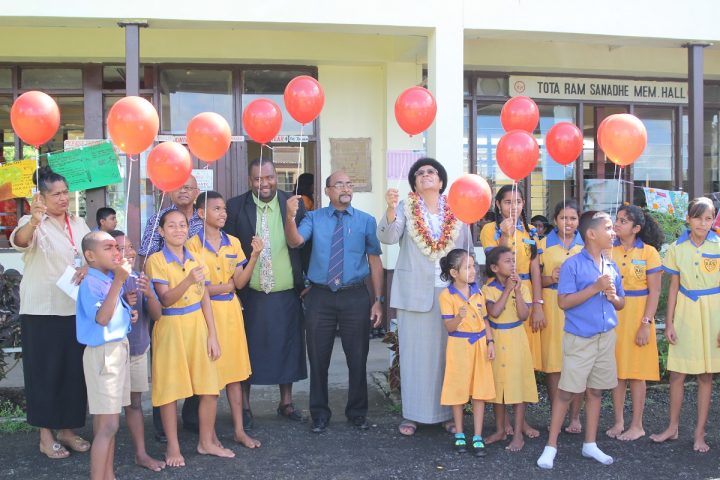 One of the most important and often more technical roles for Parliament and their members is to ensure that national legislative standards offer the best possible protection for children from violence, abuse and exploitation.

These were the comments by the Speaker Hon. Dr Jiko Luveni while launching the 100 million campaign for every child to be free, safe and educated at Vunimono Arya School.

The 100 million campaign was co-founded by Nobel Peace Prize Laureate Kailash Satyarthi and welcomed by parliamentarians around the world during the 136th Inter-Parliamentary Union Assembly in Dhaka last year.

“I am delighted to see that despite the fact that you are approaching the school holidays, you are still committed to hold this event to mark the importance of this campaign which will continue to raise the importance of protecting our children and ensuring that they are free, safe and educated.”

“As representatives of the people, parliamentarians are public opinion leaders. As such, we are well placed to promote issues of child protection within both parliament and communities.”

“This unique role as elected representatives between the people and government provides members the opportunity, authority, legitimacy and responsibility to be advocates against violence, abuse and exploitation.”

Speaker highlighted that during this week, thousands of parliamentarians, local officials and representatives all over the world will visit schools to learn with students how they can ensure every child is free, safe and educated.

“The fulfilment of children’s rights, including those to protection, depends on a global movement in which everybody not only understands and respects their duties to children, but also acts upon them.”

“I hope that you will find the program today inspiring and will continue to contribute to this important international campaign by engaging with your Members of Parliament to discuss ways to support the rights of children and those that are marginalised and excluded from justice,” Hon. Dr Luveni said.

Year 6 teacher Ms Angeline Dass thanked the Speaker for blessing them with her presence and also with the speech she delivered as it was beyond their expectation.

“The programme was an eye-opener for most of us and as teachers, we feel empowered and encouraged and we thank Parliament for choosing our school to launch the campaign.”

Deputy Head Boys Simon Compain said that after today’s programme, he learnt that children have many rights and exercising them is very important.

The programme ended with the cutting of the 100 million campaign cake and the releasing of balloons.